Heat up your winter sales

Heat up your winter sales

The notion of winter as a ‘quiet time’ in retail hardware outlets has no rational justification, writes JOHN POWER. On the contrary, it should be one of the busiest times of the year for any handyman.

Summertime, and to a lesser extent spring and autumn, are generally far more active seasons for hardware retailers than winter. But this reality is based more on cultural habits rather than climatic considerations. Historically, summer has been the season when we have tended to take long holidays, making the most of our leisure time to do all those jobs that have been ‘mounting up’ throughout the year. But are the hottest months really so suitable for hardware related activities? Anyone who has ever had heat stroke trying to build a shed in 40 degree heat – or struggled with paint that goes off and becomes lumpy within minutes of application in an airless, furnace-like room – might say no!
With more and more people taking mid-year breaks, and still more opting for part-time or less patterned working lives, astute hardware retailers are ramping up their wintertime activity and encouraging shoppers to follow suit. There are plenty of reasons to shake off the winter blues and replace them with some winter coups!

Get them in
The first challenge is to encourage warm weather customers to change their thinking about hardware projects in the cooler months, when days are shorter and DIY projects may be less ‘enticing’. It’s all about customer education. So, keep your store visible and cheerful; continue to place informative hoardings on the footpath promoting specials; keep the flags flying; use your traditional advertising media to suggest great winter projects. Use whatever means you can to educate customers about the plethora of tasks they can undertake from July to August. These include an array of indoor jobs, including painting; straightforward hobby projects; timber-based tasks like shelving rejuvenation, wall unit construction, and furniture fabrication; as well as plenty of outdoor jobs, particularly on weekends, involving landscaping, soil preparation and some planting. 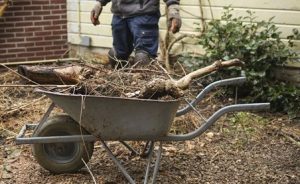 Contrary to popular belief, winter is not as inhospitable as people might believe for outdoor projects. It is interesting to note that July is the DRIEST month of the year in Sydney and Brisbane (where the wettest months are March and January respectively), and the second-driest month of the year in Melbourne (wettest is October). Granted, stereotypical ‘wet and wintry’ conditions apply in Adelaide and Perth, which experience genuinely heavy rainfall in July (wettest month of the year in Adelaide, second-wettest of the year in Perth), but the fact remains that the entire eastern seaboard is benign as far as outdoor landscaping and construction projects are concerned.
Concreters, for instance, often attest that midwinter jobs like pouring concrete foundations or small slabs for garden sheds, etc, produce better outcomes when temperatures are mild, as a lengthier curing process enhances the long-term integrity of the slab and minimizes the risks of flinty or crumbly finishes (which can occur if a crust dries out too rapidly in heat).
Also, in terms of human health, significant DIY undertakings are far easier in clement conditions than in the heat of high summer. This presents another marketing ‘angle’ for hardware retailers: elderly or sickly DIYers should do themselves a favour and complete as many projects as possible midyear, leaving the summer for sensible rest and recreation.

Promote winter projects
One of the best ways to enhance winter sales is to be specific with your suggestions. Nominate particular jobs for handypersons to undertake on a wintry weekend. A great project, for example, is outdoor decking repair or construction. Not only are cooler months easier to work in, but many hardwood boards, like merbau, require three to six months to ‘weather’ (so tannins and oils can leach out) before the timber can be coated. In other words, a June decking job fits in perfectly with a pre-Christmas oil or stain treatment, just in time for the silly season.
Similarly, retaining wall construction and other light landscaping and weeding works are ideal winter tasks, which can be performed in association with immediate plantings or as preparation for later-year plantings. As far as immediate plantings are concerned, July is a good month for putting in strawberries, onions, beetroot, peas, radishes and lettuces. Winter is also the ideal time for pruning deciduous fruit trees, and to spend some time rejuvenating soils with compost so organic matter can break down before plants begin to hit their stride in subsequent months.

Match tasks to products
Of course, all these rewarding activities require specialist tools and equipment, which is why it is essential to express projects in terms of associated hardware. Gardening departments – particularly on the eastern seaboard – should be awash with winter sales of heavier-style implements and pruning or digging tools, landscaping equipment and edging paraphernalia, as well as an array of paving, walling and decking products and tools. Compost bins should also be highly visible on the store floor. Shout out the merits of temperate weather painting inside the home, where coats are so much easier to apply and results (arguably) more consistent than in summer.
Simple suggestion sheets are often all a consumer needs to kick-start a project. Information is everything.
Bunnings, for example, was ahead of the pack in April when it distributed a straightforward media release showcasing winter vegetables to plant and allied outdoor landscaping works to start – all part of a catchy ‘garden-to-plate’ campaign. Naturally, the release concluded with suggested products to achieve successful results: watering cans, bags of soil improver, raised garden bed containers, packets of seeds, etc. This marketing exercise was neither expensive nor overly sophisticated, but it was a thoughtful way of reminding customers that winter is a great time to do a whole range of heavy-duty work involving hardware.
Australians are a flexible mob when it comes to working, but it is up to hardware retailers to remind customers that they should be equally adaptable concerning their leisure and DIY activities.
It’s simply a case of presenting clear arguments to the customer, press the advantages of working in cooler weather, tackling jobs now instead of leaving them to dominate the Christmas break, and using temperate conditions to produce better outcomes.