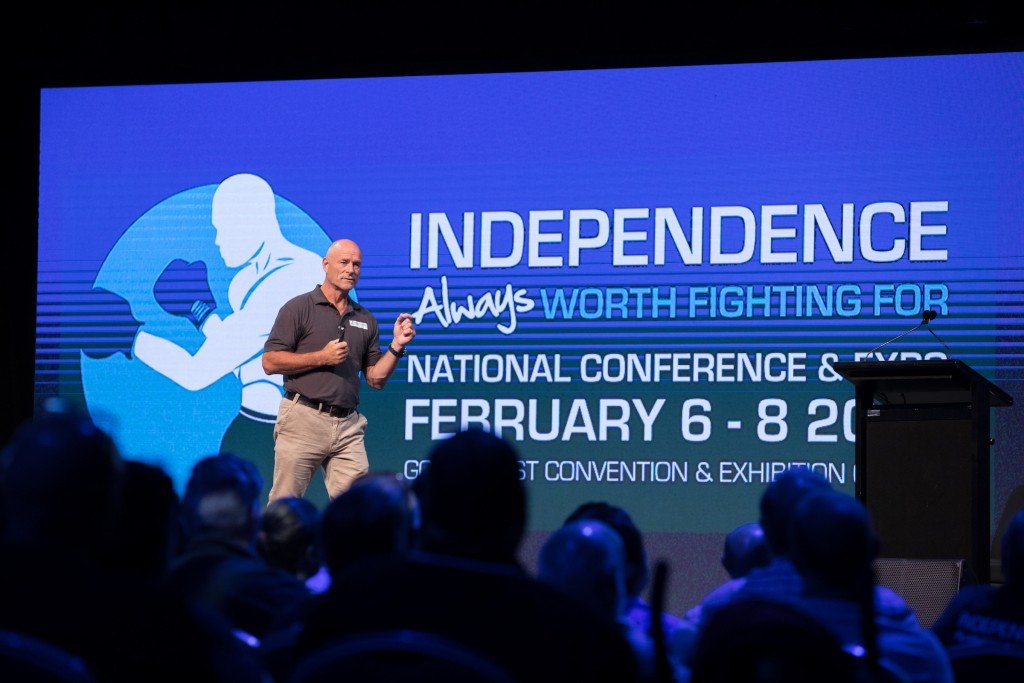 History is made as Mitre 10, Home Timber & Hardware, True Value and Thrifty-Link become one family at Expo 2017.

It was a great privilege to be invited to the Independent Hardware Group National Conference & Expo on the Gold Coast in early February. Formerly the Mitre 10 event, this year combined the former Mitre 10 operation with the recently acquired HTH Group, a transaction that was only approved by the Australian Competition and Consumer Commission (ACCC) in October 2016.

Mitre 10 Expos have always been big business for suppliers and the Mitre 10 members. However, this year the combined Independent Hardware Group membership saw records easily broken in terms of attendees, supplier support and store orders.

So much so, that space was at a premium as suppliers came to support this vastly bigger number two account in the hardware/DIY segment.

The numbers tell the story. Over 2,100 registered attendees (including children) and 215 suppliers attended, most with bigger and better deals than last year according to the many Independent Hardware Group members the Australian Hardware Journal spoke to.

The positive sentiment was confi rmed by comments from members and suppliers at the awards presentation and also during the Expo. Such positive sentiment indicates that the deal that Independent Hardware Group CEO, Mark Laidlaw, and a dedicated Metcash negotiating team was able to conclude, will stand independents in good stead for the future.

Given the fact that a large percentage of the Trade market is supplied by a couple of other groups or is non-aligned, the Independent Hardware Group has a tremendous opportunity to build on its strong foundation in this segment.

This is particularly so with new initiatives announced at the conference’s dedicated business session, such as Truck Tracker and Tradies Online.

Mr Laidlaw spoke of the new senior Independent Hardware Group executive team and his delight in being able to combine talents from the former Mitre 10 and HTH operations.

This included progress on the group’s core ranging program and, in particular, the work underway to consolidate and align the ranges across both the Mitre 10 and HTH business with “a consumer-driven approach”, now the number one focus for the newly integrated merchandise team. Recent examples of store investment projects from both the Mitre 10 ‘Sapphire’ and Home ‘XCLR8′ perspectives were showcased, as well a snapshot of the marketing programs and brand architecture evident across both groups.

Karen Fahey detailed comprehensive plans to address the difficult subject of branding and advised that a research company had been engaged from a short list of three to conduct a comprehensive review. The research company’s role is to engage with members and consumers over the coming months, to gain their opinions,” she said.

“They will explore consumer and member attitudes towards our brands, and understand the key drivers of brand choice. It will be a rigorous approach that will guide our end decision on the best future brand architecture to ensure our viability in the market,” Ms Fahey said.

To kick-start the process, selected interviews took place at the Expo with around forty members. Further surveys will be conducted over coming weeks.

Mr Laidlaw also summarised details that will assist members in the quest for increased turnover, highlighting that, “this is a proud moment for independent hardware. Everyone coming together today is an opportunity to see the true size and scale of our group and the future opportunities that will be delivered for our members. If we stay united, independent hardware operators can not only survive, they will thrive.”

In summarising the initial business session, Mr Laidlaw said the group was excited to be launching “a new stand-alone trade model that trials a number of initiatives that will add great value to the industry. We’re still in the trial phases but our members will hear much more about these initiatives over the coming months.”

“The conference is also an opportunity to give an update on the new trading terms’ model, as well as the rollout of new Village and BDM territories to support its vast national network of bannered and un-bannered stores,” Mr Laidlaw said.

An overview of current trading terms was also presented in the interest of being transparent.

“When Mitre 10 and HTH terms were compared side by side, each had some benefits over the other. The challenge now for the group is to produce harmonised terms that provide improved benefits to members whilst still allowing Independent Hardware Group to provide all the necessary support required to keep successful independents competitive,” he said.

Metcash commits to independent’s success
Metcash CEO, Ian Morrice, also addressed delegates during the business session and had some positive words for how Metcash sees the independent market across all of its pillars – food and grocery, liquor and hardware – and how the combined hardware operation will breed success.

Giving background to his role Mr Morrice said “three years ago, when I came into the job, Mark Laidlaw, myself and other colleagues in the leadership team – we went away together, sat down and said, ‘what is the purpose of this group? Why do we exist? Why does Metcash exist today?’ And the answer became very clear to us very quickly. It is about building successful independents.”

“That is the moral compass that we landed on three years ago and it guides every decision we take in our business today. And it is fast becoming the collective passion of everyone who works across the Metcash Group.”

“Building successful independents is the focus of what we do and you will hear more about how we deliver this over the course of today. But one of the key things is for us to become and remain a business partner of choice, not just to our members, but also importantly to our suppliers, because we recognise we play an incredibly important role for both groups of stakeholders in the business,” Mr Morrice said.

“The other thing that we aim to do is help our members create and sustain the best store in town. Three-and-a-half months ago now, we got the opportunity to unite and strengthen the major independents across the hardware sector, a once in a lifetime opportunity that we feel privileged to lead as we integrate two highly successful hardware businesses.”

He said it was important to also remember that, “we are in this together, and the more that we have looked at Home Timber & Hardware alongside Mitre 10, we see an incredibly complementary network of stores.”

“Yes, there are some stores that are close by each other – but as a general principle across Australia, the stores are actually very complementary,” Mr Morrice said.

“In the very last three-and-a-half months, what we have discovered is that the best of both is better than either on their own. And this is another theme you are going to hear about from Mark Laidlaw and the team. It is the best of both that we are looking at here and we will be working closely with all of our members to ensure the long-term viability of the independent hardware market,” he said.

Important statistics
Just some of the impressive statistics that came out of the Independent Hardware Group Conference included: member registrations reached 900, total attendees came in at 2,100 and supplier Expo stands at 215 – including many multi booth stands.

As far as member attendance goes, 65 per cent of stores were represented from across its four retail banners as well as a number of un-bannered key customers who were invited to attend. This total member representation equates to 95 per cent of the group’s total sales volume. The combined Independent Hardware Group business has a total of 750 bannered stores, of which less than 10 per cent are company owned. Company owned and joint venture stores are key to trailing new initiatives and core ranging for the future, whilst still allowing fl exibility of local area marketing. Th e old 80/20 rule applies.

Gala dinner and awards
The conference was also an opportunity to celebrate success.

“The event saw us honour all members who have applied excellence to their offer by reinvestment in training, facilities, fixtures, technology, ranging and service. Those that have taken the best aspects of their respective marketing programs and driven sales hard at a local level, and those that acknowledge that our brand is bigger than the sum of all parts and share their learnings with other members to improve our ability to compete,” Mr Laidlaw said.

The awards recognise the high calibre of retail and trade expertise across its Home Timber & Hardware, Mitre 10, True Value Hardware and Thrifty-Link Hardware banners, acknowledging top performers over the past 12 months at a state and national level.

Nominees are judged on performance in core business areas including store standards, customer service, innovation and business strategy. Th ere were a total of 20 awards presented at a national level, including nine store awards, five supplier awards and a number of individual recognition awards. State finalists were also recognised.

This year the MCs for the awards dinner were Mitre 10 ambassador, Scott Cam, and for the first time Channel Nine presenter, Catriona Rowntree. Long-time co-MC, Carl Salem left the business to return to Sydney for family reasons once the acquisition of HTH was approved.

However, Carl did make it to the stage later in the evening when he was called up by Mark Laidlaw as the recipient of the CEO Recognition Award.

National Awards
The national store awards for the various categories were presented at a capacity filled Gold Coast Conference and Exhibition Centre main arena on the last night of the three day event. Members and suppliers were in fine spirit following an extremely successful Expo which generated record sales for exhibitors and some great deals for members.

John Clennett joins an illustrious group of former winners of the Ian Nisbett Hall of Fame Award. They are: Fred Womersley, Mal Petrie, Frank Brennan, David O’Jones and the Melville and Lanham families from Sunshine Hardware. This list will be added to over time and future generations of hardware families will acknowledge the work carried out by such industry stalwarts in protecting and developing the cause of hardware wholesaling and retailing. 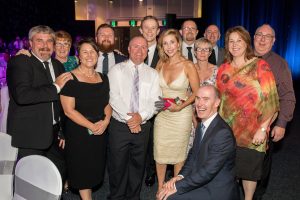 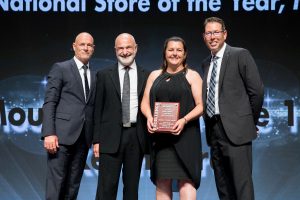 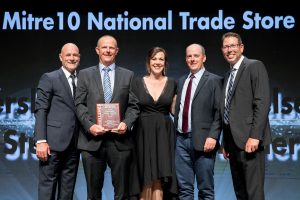 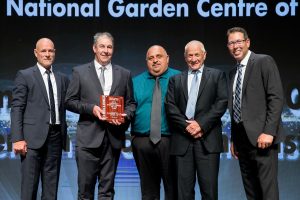 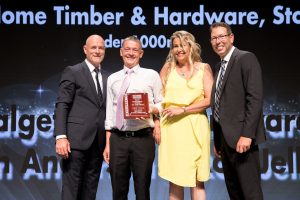 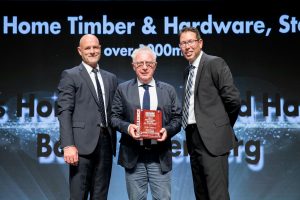 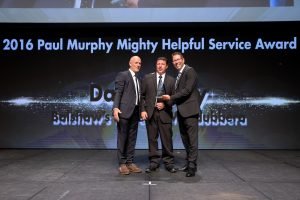 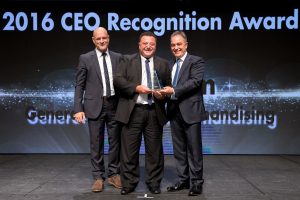 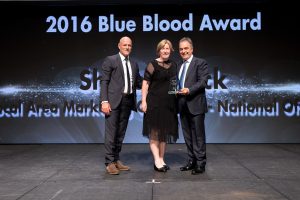 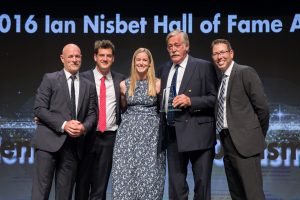