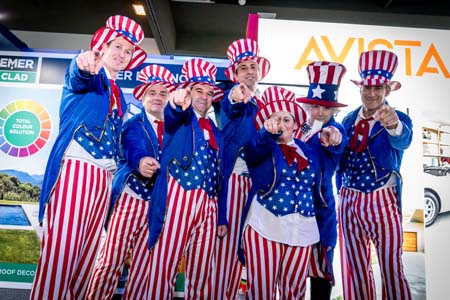 Inspirations Paint Chairman, Glenn Ringrose, welcomed over 250 delegates to the group’s 16th national conference held in the Barossa Valley, Adelaide in May. He praised member and supplier delegates alike for the second highest ever level of attendance, stating it is a testament to the group’s position and growth since the 15th National Conference in Queenstown last year.

Inspirations Chief Executive Officer, Robert Guy, said delegates would also be given a real insight into the paint store group’s performance over the past two years and also the group’s strategic direction for the next two years over the course of the conference. During the business sessions, Mr Guy outlined the strong growth in Inspirations Paint’s sales highlighting that paint sales had grown at a rate significantly higher than the total Australian paint market.
“This continued growth was based on multiple factors, but undoubtedly the 20 year strategic alliance with Dulux is at the core of the stable growth. The origins of the long-term alliance were revisited, when in November 1997 the 3D Paint Store group, as it was then known, decided to franchise and as an integral component of the franchise, selected Dulux as the group’s core paint brand,” Mr Guy said.
“The decision, which was controversial at the time, has resulted in a five times increase in Inspirations Paint volume per annum over the period. This is arguably the single most defining decision in the Australian paint specialist industry,” he said.
Looking forward, it was stated that whilst the majority of sales come from trade paint, it is in fact in the area of retail paint, retail and trade accessories where Inspirations Paint is focussing its efforts in the medium term, according to Mr Guy.
During the business sessions it was conveyed that strategies will be implemented in the short term to improve retail customer experience at all touch points, especially in relation to customer service standards and the resulting levels of customer satisfaction.

Keynote presenter
Following the business sessions, delegates were then treated to a keynote presentation from Adjunct Professor of Marketing at Melbourne Business School, Mark Ritson, who is widely acknowledged as one of the world’s best marketing instructors. Mr Ritson has consulted to brands such as WD40, Johnson & Johnson, Triple M, Louis Vuitton, Qantas, Dior, and Tag Heuer.
During the keynote presentation, Mr Ritson outlined ‘10 Great Marketing Challenges’ for the group, focussing on topics including: customer orientation, touchpoints, segmenting-targeting-positioning, strategy, the ‘heroin of price promotions’ and disruptive consistency.
The following day Mr Ritson also conducted a 90 minute Harvard case study style workshop, which had delegates analysing Inspirations Paint’s ‘sales funnel’ and finding the key areas where customers ‘drop out’ of the funnel. Delegates then had to set a S.M.A.R.T. objective to fix the ‘drop out’ level and state five actions they will ‘stop doing’ and ‘start doing’ this year to achieve the objective. 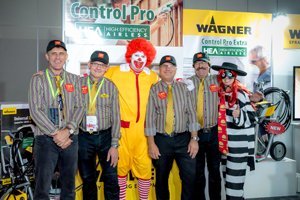 Focus on the year ahead
Inspirations Paint Head of Marketing, Joel Goodsir, went on to outline seven areas of focus for the year ahead specifically aimed at growing profitable retail sales through a service leadership approach. Inspirations Paint differentiates itself through a dogged focus on personal attention to customer’s paint projects, according to Mr Goodsir. Actions such as a renewed focus on staff training, staff training, staff rewards and the implementation of a Marketing Automation system were detailed along with a relaunch of the ‘Paint Club’ customer loyalty program.
Following this, enhancements to the group’s replacement business system, Pronto, was also outlined by Inspirations Paint CFO, Gary Jetson, who announced that the rollout of the new system was completed a year ago in over 100 stores.
Human Resources Manager, Karen Keegan, then went onto launch ‘The Brush Up’ staff training program, while also discussing changes to Franchise Workplace Law. A number of round table sessions were held as well as a state based session run by the Franchise Advisory Council (FAC). The council is made up of franchisee representatives from each state group who act as a conduit between store owners and the Inspirations Paint national office.

Dulux Welcome Dinner
As part of the Dulux Welcome Dinner, sponsored by Dulux, the Inspirations Paint logo was emblazoned upon the iconic Adelaide Oval’s giant screens overlooking the Torrens River. Upon arrival, delegates visited the Don Bradman museum and had the opportunity to try their skills hitting a golf ball against a water tank with a cricket stump and viewing memorabilia from throughout the great man’s career. Chief Operating Officer of Dulux Paint & Coatings, Pat Jones, spoke of the 20 year partnership between Dulux and Inspirations Paint and thanked franchisees for their long-term support and commitment. 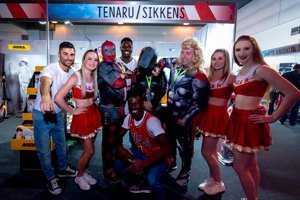 ‘American Icons’ trade show
The Inspirations Paint fully themed trade show has been running for 10 years and shows no sign of tapering off. The motto was, ‘no costume, no entry’ so suppliers and members alike interpreted the ‘American Icons’ theme with a wide array of costumes including; superheroes, baseballers, oversized hot dogs, movie stars, statues of liberty, Mini Mouses and a host of presidents including half a dozen Donald Trumps.
The all-American music rocked and was complemented by US inspired food options including: mac and cheese, sliders, hot dogs, fried chicken, fries, smores and a giant wall of donuts. Fun times aside, the event remains the jewel of the Inspirations Paint conference crown and is utterly serious when it comes to supplier deals and member take up. Many suppliers reported their trade show sales were met and dramatically exceeded their expectations, particularly with over $35,000 worth of supplier prizes given away on the night.

Barossa Valley Tour
Delegates began their Saturday exploring the fresh produce of the Barossa Valley Farmers Markets, before arriving at Chateau Tanunda to tackle a ‘mystery challenge’. After entering to the tune of Katy Perry’s, ‘Hot N Cold’, delegates were met by Maggie Beer’s, daughter Elli Beer, who instructed delegates to head to one of 21 cooking stations.
Elli then instructed delegates that they would have one hour to produce a dish with ingredients and cooking equipment from the pantry, which would then be judged by her. As aprons were handed out, the grand ballroom became a frenzy of activity as woks flamed and pans of water boiled. The winning dish was a tie between a rare Kangaroo fillet and an Asian inspired Salmon dish. The winning teams bagged bottles of Chateau Tanunda wines and produce from Maggie Beer’s Farm Shop. That afternoon, delegates visited a number of Barossa Valley venues including, Yalumba, Seppeltsfield and the Barossa Valley Brewery. 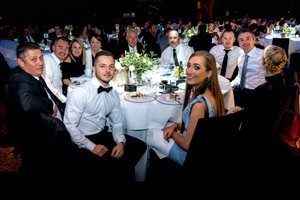 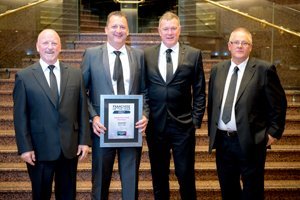 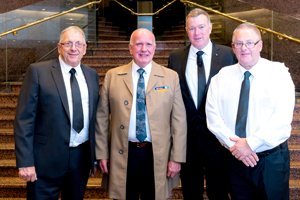 The Coat Award
The history and tradition of the Inspirations Paint Coat Award goes back 20 years and was originally awarded to the winner of a 3D Paint Store versus Suppliers golf day in 1997 at Yarrawonga Golf Club.
However, it is by no means a fashion statement these days as it represents the highest honour and recognition from the group to an individual who has provided outstanding service and personal contribution to the group over many years. The Coat Award is also not restricted to franchisees and previous awardees have also included suppliers and long serving staff.
Inspirations Paint’s longest serving member and the current holder of the Coat, Gary Taylor, presented the Coat to this year’s winner, John Willis. John has been involved with four suppliers to Inspirations Paint over a 27 year period including: Dulux, Cabot’s, Flood and Norglass and is this year’s
worthy winner.