Is rooftop amenity the new standard for residential developments?

Is rooftop amenity the new standard for residential developments? 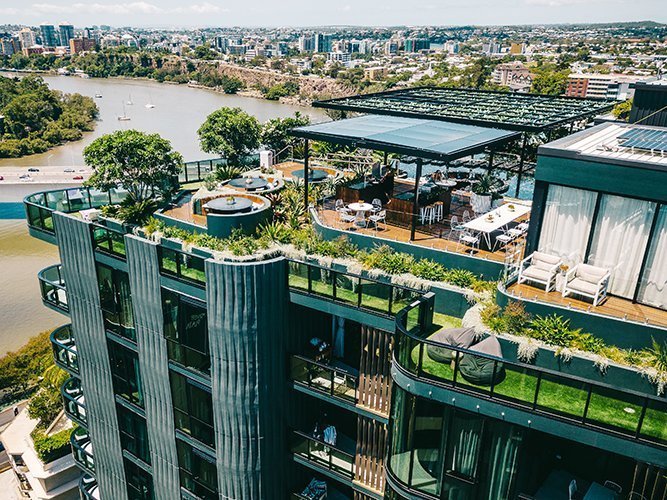 There is no question as Australia’s population grows, high density living will become the way of the future, and for many young Australians looking to own their first home, it is often the only affordable choice.

Owning a two-bedroom apartment with sweeping skyline views is fast becoming the new Aussie dream, and with affordable quarter acre blocks becoming harder to come by, young professionals and retirees alike are choosing to live closer to the heart of CBDs.

It is for this reason that top tier and boutique developers are capitalising on humble rooftop gardens, turning them into sanctuaries of relaxation and recreation zones to dine ‘al fresco’ while enjoying panoramic views of the urban landscape. 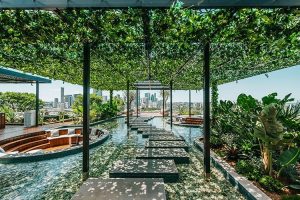 This growing trend has also seen landscapers, such as Brisbane based Martin Brothers, recently complete the construction of three major rooftop amenity projects for high-density residential projects in inner Brisbane.

“As apartment living becomes a standard choice for not only Millennials, but also many downsizing retirees, developers need to think about how they improve their customers’ quality of high density living,” said Mr Martin.

“Especially in cities like Brisbane, that enjoy a temperament climate year-round, planning the inclusion of beautifully landscaped rooftop amenity can not only help developers capitalise on once-overlooked space, but also improve the capital value of their residents’ apartments over the long term,” he said. 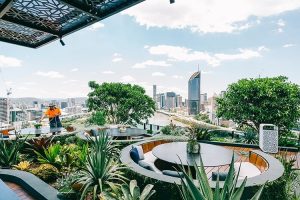 Green spaces within new developments not only include a large roof top garden space, but also smaller spaces on verandas, where planter boxes, for herbs and plants have become increasingly popular, as well as compact garden accessories for smaller court yards. Mr Martin said he found overseas projects particularly inspirational.

“In Hong Kong, for example, the rooftop amenity at ‘Skypark’ in central Kowloon is geared towards young professionals seeking a lifestyle balance, with developer, ‘New World,’ creating a setting primed for socialising and relaxation, offering lawned gardens, a green clubhouse and park spaces with amphitheatre-style outdoor seating.”

In the heart of Brisbane’s Woolloongabba, ‘South City Square’ is a visionary residential mixed-use project. The overhaul of the once industrial area features six rooftop gardens across five residential towers and the South Square Hotel building.

“A well-planned rooftop amenity is invaluable, especially in high-density areas that are lacking in green space and outdoor facilities.”

By rethinking the boundaries of green spaces and luxury living in high-density urban areas, sprawling urban centres are undergoing a dramatic transformation from concrete jungles to green cities that breathe better.

Ultimately, this trend shows that the humble rooftop, terrace or courtyard will no longer be a second thought, but rather a key element and opportunity in future high-density developments.

Indoor plants bloom in popularity
Growing indoor plants has also become an increasingly popular trend in the past 12 to 24 months, according to Takasho Group Managing Director, Andrew Hogg, who said the trend is driven not only by media, but also the Nursery Industry Association through the Plant Life Balance promotion. 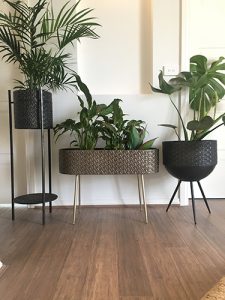 “With the ever-increasing popularity of indoor gardens, we are about to launch our fantastic range of indoor planters made of metal/pressed metal. We have been showing our customers the range and this has been met with a great deal of excitement. The first shipment is due to arrive in early August and customer pre-orders have been strong,” he said.

Mr Hogg said Takasho has also significantly increased the number of products it will launch this upcoming garden season.

“Normally we introduce approximately 40 to 50 new products each year, but now with Garden Trend recently going into receivership, we will be introducing over 150 new SKUs this coming spring. Many of our customers contacted us after the Garden Trend announcement to see what we could supply from the range. After many meetings with our customers to gain their feedback on which products they would most like us to produce in our own factory in China, we will also soon be launching a really great range of garden accessories,” he said.

Mr Hogg said Takasho Group’s main point of difference is that it has a network of Takasho offices around the world (Japan, Germany, USA, UK, Taiwan, Korea, Australia, Vietnam and India).

“We share global information on emerging trends and technologies and react to these in a very considered and planned way. We own our own factories in Japan and China and we control our quality through Japanese quality standards. We try to manufacture products that are not currently in the market, including our newly patented VegTrug and Wooden Planter designs, which have new colours and mixed materials,” he said.

“Last year we listed on the second section of the Tokyo Stock Exchange and in a couple of months we will be listing on the first section. The auditing, systems and procedures we are required to undertake to be a publicly listed company has certainly tightened up our systems and efficiencies making us a stronger, reliable supplier,” Mr Hogg said.

Over the next 12 months, the Takasho Group will display at many garden and outdoor expos nationally and internationally including stands at the National Hardware Show (Vegas), spoga+gafa (Germany), BBC Gardeners’ World Live (UK) and Glee Show Birmingham (UK).

An ageing Australian population, as well as an increase in smaller green spaces in urban areas, has seen an increasing need for functional, easy-to-use, lightweight garden watering and spraying products in the category, according to Ms Candy.

“Hozelock has responded to these growing trends with a range of ergonomically designed hose systems, such as the Pico Reel, and the premium range of Ultimate Hoses which are approximately one third lighter than corresponding competitor hoses. This offering responds to the need for an easier to use, lightweight hose. With a 30-year guarantee, anti-kink and crush technology and a smooth outer layer for easy manoeuvrability, the ultimate hose is perfect for the ageing consumer and smaller gardens,” Ms Candy said.

“Another mega trend is the trend towards premiumisation, which is a movement towards mid-tier products losing share to both low-priced commodity products, as well as high-end premium products. Hozelock’s quality UK and European made products offers a premium garden watering range to respond to this developing trend,” Ms Candy said.

Gerni cleans up new garden trends
It seems the purchase of fire pits and meat smokers has been on the rise due to Aussies wanting to create comfortable outdoor living areas that can be used even in the cooler months. While both of these products require fire, this also means plenty of ashes and mess to clean up afterwards. It also illustrates that consumers are increasingly using their backyards as secondary zones to their homes and also want them to remain clean and easy to maintain.

It is for this reason that Gerni continues to launch products perfect for use in an annual spring clean, as well as the heaviest and most demanding applications as well.

“Gerni maintains its edge with a few unique selling points that sets Gerni apart from the rest, including a Click’N’Clean Nozzle System. This allows all accessories to be easily swapped across machines. Gerni’s metal pumps also ensure long lasting performance, allowing the Gerni to be used for longer periods and more consistently due to a higher resistance to heat and friction. The hose connection to the gun also has a 360-degree rotation, which means it will not kink and therefore will not damage the hose,” Gerni Product Manager, Greg Jones said.

“As users are continually faced with new brands and models, the market remains very competitive. However, increasingly we are seeing users realising that paying a little more gives them better value in a machine, both in terms of performance and durability,” he said.

Beating more than 1,100 merchants, Hoselink is now up against Beserk, Kogan.com, Meshki, Pillow Talk and Showpo for the coveted winning title, to be announced at the end of the month.

ORIAS is the country’s flagship awards for businesses that sell online, to recognise and reward retailers for their innovation, hard work and outstanding customer experiences. The People’s Choice Award is the only ORIAS category voted for by customers, according to Hoselink. 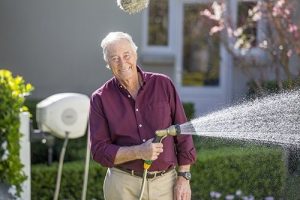 “Our customers relate to founder of the brand, Tim Kierath, who was just like them at one point – fed up with bursting hose connectors and looking for a solution. Twenty years ago, Tim came up with just that, an invention to innovate the way we water with a patented design for 100 per cent watertight fittings, featuring a unique bayonet point and twist connection,” a company spokesperson said.

“After a rocky start trying to distribute Hoselink’s connectors through retailers in Australia and abroad, the business came close to folding. Finally, in a last-ditch attempt to overcome the ruthless retail giants and near financial ruin, Tim and his family joined together to give it one last shot, cutting out the middle man and launching a prosperous new website with a direct selling approach solely in Australia, taking a huge risk on something they had no prior experience in.”
“The strong belief in a totally unique product and a vision to become a reliable Australian brand where customers are treated like part of the family has never wavered, and it is this that has taken Hoselink from strength to strength,” the spokesperson said.

Tim is now in his seventies and still works full-time in the office alongside his three children, Sally, Ben and Jamie, appearing in adverts and working to continually grow and strengthen the brand, refusing to rest on his laurels.

“Our customers come to us fed up with the standard click-on hose fittings, looking to change their hose set up, and often end up changing their lives thanks to Hoselink’s range of products designed to make tedious tasks easier – from our Retractable Hose Reels that make watering accessible for everyone, including those with disabilities and arthritis, to gardening gear designed to make backbreaking jobs a breeze.”

‘Warranties may expire but Hoselink’s after-care service never does, whether it has been two years or 10, we will always help our customers and their votes have given us new confidence that the loyalty is mutual,” the spokesperson said.