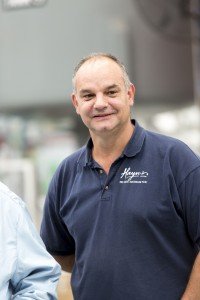 Mr Haymes said there is currently a lot happening in the market, which is having neither a positive or negative affect on paint sales. Although he pointed out strong retail paint sales have continued through Bunnings (which Haymes do not sell through), there is some struggle in sales in the independent hardware channel. However, this is not the case with paint specialists, according to Mr Haymes, who said sales within this sector remain particularly strong.

Mr Haymes pointed out just a few of the many factors currently affecting the Australian paint industry including: the obvious exit of Masters; Valspar (Wattyl, Solver) purchased globally by another US multinational Sherwin Williams; trade growth remains strong across most states; company owned stores (Dulux, Valspar, PPG) share of the trade business still strong at 60 plus per cent; while heavy discounting by some large multinational manufacturers continues in order to stabilise volume.

When discussing the point of difference that Haymes has in the Australian paint market, Mr Haymes said he believes it is a combination of being a 100 per cent family owned and made business, which only sells its product through other Australian family owned and operated businesses; such as paint specialists and independent hardware stores.

“Haymes also believes passionately in the importance of supporting its trade partners with not only the best paint products available, but also good old fashioned customer service and assistance. Because Haymes is smaller than the ‘big three’, we remain close to our customers, which is why we can respond to their needs and opportunities so quickly and easily,” he said.

“I believe we also have the best team in the industry. Our sales team, which is now at around 50 representatives nationally, are very experienced which means they can easily make most of their decisions on the spot. They know their customers and can do what is needed without layers of managerial interference.  From our manufacturing team to our service express customer service team, the people at Haymes Paint do the business basics better – and we also have a bloody good paint,” Mr Haymes said.

“This is particularly the case with pricing to the trade still at 1990 price points. It seems that all costs, including raw materials, labour and freight, continue to be on the increase, while the price to trade continues to decrease. We can only control our controllables, which means we need to continually improve the way we do business,” he said.

“The market will continue to be competitive, particularly as the demand increases within trade, as well as the ‘do it for me’ sector. There is also the on-going demand in the building and commercial markets, through both new and re-painted projects,” Mr Haymes said.

Mr Haymes pointed out several issues dominating the industry currently, including the decision whether to implement two coats versus three coats in new homes and commercial buildings, as well as the environmental footprint involving VOC’s and PaintBack. PaintBack is an independent, not-for-profit organisation that provides a cost-effective solution for trade painters and house holders to remove unwanted paint and packaging.

“However, it is impossible to monitor cheap, imported products and the ingredients used in these products and whether they are of a quality which allows the product to perform within Australian conditions. I also think more work does need to be done on the definition and marketing of Low, No and Zero VOC products within the market.” he said.

In recent months Haymes continued its new product evolution, which is primarily focused on sustainability, according to Mr Haymes. This is particularly the case with the launch of its new Haymes Ecocare Wash station.

“Our wash station has been incredibly successful. It was designed by a painting contractor – for painting contractors. The feedback we received when researching the project was that many painters wanted a unit they could easily transport to and from site. Haymes Ecocare has a 60 litre capacity, allowing our customers to work at an ergonomically appropriate height and treatment is in a simple one step process. The price needed to be attractive for many of our customers and we have been able to bring the unit to market for around one third of the price of our competitors,” he said.

“Another exciting product due to be released shorty is the new Haymes Interior Expressions range. This product is on my walls at home and is outstanding. Not just the best we have ever made, but it looks like it is the best there is,” Mr Haymes said.

Haymes Paint has had several projects come to fruition in recent months, including the launch of its recently released history book, titled ‘Paint flowing through my veins’. Written by historian, Phil Roberts, the book details the Haymes business from 1935 to 2015, telling the story of how the company came to be the fourth largest paint producer in the country.

Mr Roberts said it was a privilege to write the book and said it was an enjoyable experience writing about the good times, as well as the hard times throughout the company’s history.

Known for their charity work, the Haymes family are allocating proceeds from the sale to the ‘Ballarat Mechanics Institute’.

Haymes has also implemented some recent design changes to its branding, ensuring that its branding is more tightly defined. The new branding is also expected to convey the message that the Haymes brand personality is not only genuine, inventive and quirky, but also feisty, with a more succinct brand positioning. According to the company, the new branding will be rolled out over the next few months.

Looking forward, Haymes has several new launches and innovations planned, including the launch of its new interior product, with free sample pots planned at the start of the painting season.

“Haymes has a unique and innovative retail and trade promotion calendar planned for 2016/17…. watch this space!” Mr Haymes said.

Dulux has announced the chosen five recipients of its newest design tour scholarship, in collaboration with the Design Institute of Australia (DIA), DIAlogue on Tour.

DIAlogue on Tour is an expedition which is exclusive to DIA and DINZ members across Australia and New Zealand, which will take the five winning design professionals to London and Stockholm in September where they will meet and learn from European and Scandinavian design talent.

The winners will share ideas and viewpoints with their hosts, showcasing the talent coming out of Australia, and return home with a taste of inspiration to reinvigorate their own design style and career.

“This experience will help the professional growth of these designers by immersing themselves in this once-in-a-lifetime cultural opportunity. We hope the new tour inspires more designers from across Australia and NZ to get on board, and also become DIA members – an institute which is highly regarded in our industry,” Mr White said.

Winner and architect, Matt Gibson, was thrilled to be chosen, and is looking forward to conveying global trends here in Australia.

“I’m thrilled to be given this opportunity to interact with Australasian peers and European design professionals, whilst absorbing international perspectives. It’s an exciting chance to source inspiration to drive our practice’s progression further,” Mr Gibson said.

To enter, applicants answered a series of questions on their design philosophy and inspiration, and provided commentary on how they would benefit from the opportunity.