Allan Horrigan built his business from humble beginnings selling tools from the back of a small van, to the successful industrial store he runs today, through hard work and delivering on customer service.

Allan and his wife Margaret developed the business name from a combination of their names, Allan and Margaret, and began the business after Allan sold agricultural machinery in the local area for many years.

“I started the business at the age of 34 in 1984, when I purchased a Mazda diesel van to sell out of. I am 65 now. The day that I started on the road, I had $60 in my cheque account and I borrowed $5000 worth of stock from a friend in business. I got myself into gear and away I went,” Allan said.

“Originally I sold farm machinery from age 15 to 34 because the local area used to be mainly rural, but I knew it was going to quickly change to be one of the biggest industrial areas in Australia. When I started selling tools, there was hardly any industry in this area but it was changing rapidly. Farming was depleting, so farm machinery was going to be harder to sell and I thought I would try something different,” he said. 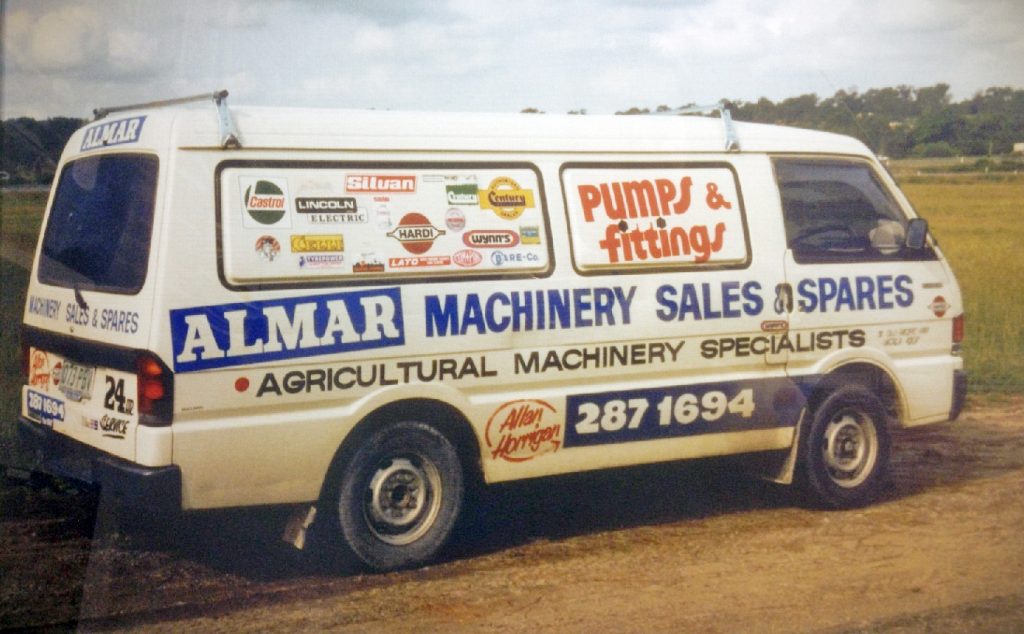 “On one side of the building we have the Industrial Supplies and on the other side is a Work Wear shop. So we have Almar Workwear and Safety incorporated into Almar Industrial Supplies. We have two shops all under one roof, and you can go from one shop to the other without going outside.”

“About four years ago I saw an opening for a workwear shop, so I opened a separate shop. It is called Almar Workwear and Safety which specialises specifically in workwear and road safety goods. The industrial and tooling side has grown the most in the last five years,” he said.

With stiff competition growing in the area and the mining industry going into recession in the last 18 months, Allan’s business is coming out of a period of stagnation.

“When the mining industry slowed down, quite a few of our customers, who were either contracted to the mines or had a lot of subcontractors working for them, were affected. Local business has also dropped off simply because there was so much from the mining sector that was going into the general economy. We also have a lot of customers who contract to gas fields around the Darling Downs, who buy from us,” Allan said.

“We never used to have much competition in the area but now we have got quite a bit. We have another welding company in our area now, as well as seven or eight other businesses who sell similar goods to us, but we have held our own over the quiet times and we are still going strong,” Allan said.

In recent times, one of the more positive changes Almar Industrial Supplies has made is changing buying groups, to now be a part of Industrial and Tool Traders Group, which is a sub-group of HBT.

“Our former buying group had become too complicated and demanding, so we decided to join with HBT in July last year and we haven’t regretted it at all. Everything is so easy to follow at HBT. It is just not as complicated as some of the other buying groups. Things are so black and white,” Allan said.

Allan said he believes it is not only important to have a buying group which is easy to work closely with, such as HBT, but also being part of a group which delivers on outstanding service and can make a difference when competing against so many other businesses.

“Our service sets us apart from our competitors. We have a policy that if a customer wants something we get it and we get it quick. We don’t want to muck people around.”

“We also offer a free delivery service to customers in the local area and we deliver up to twice a day. Most customers are very happy with our service. We are finding it increasingly harder to compete with the big hardware chains’ pricing but we are holding our own with service. When our customers come into the shop, we also make sure our staff talk to our customers about products rather than just point in the direction of a product and say, it’s over there mate!” Allan said.

The store also has two representatives who work on the road, calling in on customers on a regular basis to ensure they have everything they need from the store.

Looking onto the future, Almar Industrial Supplies and Almar Workwear & Safety is determined to step up its on-line offer, with plans to launch a new website shopping cart that will work in conjunction with the store’s current website.

“It is the way of the future and smaller businesses who don’t move with the times won’t be able to function. We are working on our online shopping offer now and should definitely increase sales once it is up and running,” Allan said.