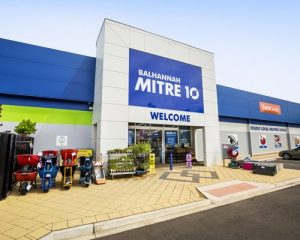 Balhannah Mitre 10 owners, Simon and Jodie Henderson, exude both pride and humility when it comes to discussing their family run business and their recent achievement of winning National Store of the Year – Large Format at the Independent Hardware Group conference National Awards.

“We were very surprised and shocked to win the national award after seeing the calibre of the other state winners, and were very humble to receive the award,” Mr Henderson said.

To be in the running for the national competition, stores are required to have first won a state award, which Ballhannah Mitre 10 took out in October 2016. 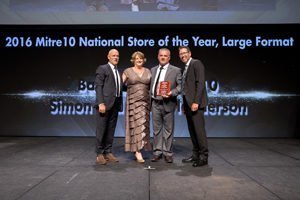 At the national level, they were given a Hardware Standards Australia (HSA) score of 98 per cent, equating to five paint brushes. HSA scores are obtained by fulfilling an extensive list of criteria including: brand compliance; store cleanliness; merchandising, signage and displays; staff appearance, professionalism and knowledge; adequate stock levels and appropriate product ranges. A score of 98 per cent is no mean feat, but Mr Henderson was quick to praise the entire team at Balhannah Mitre 10.

“We have a proud, passionate team of dedicated staff who keep the store to the highest standards that are required by Mitre 10,” he said.

The Hendersons have owned and operated Balhannah Mitre 10 in the Adelaide Hills since 2013. As a proud family business, the store also incorporates Hills Plumbing Supplies, which is a member of the Plumbtec Plumbing Group. They previously owned another Mitre 10 store in nearby Hahndorf, so are no strangers to the hardware industry.

Significant refurbishments
Under the Henderson’s ownership, the Balhannah store has undergone significant redevelopment over the last three years and sales have increased as a result. “When we purchased the store, the retail off er was 700 square metres on three levels with 17 carparks, next to the busy Onkaparinga Valley Road. The trade and building supplies off er was a 100 square metre shed and very uneven dirt area located 100 metres apart,” Mr Henderson explained.

“The business in Hahndorf was transferred to the Balhannah site, which increased the trade sales significantly, and the new retail off er with easy access and (very) extended ranges, were what the customers were looking for in the area,” he said. Now, with a 50/50 split of trade and retail customers, all departments have grown significantly since the redevelopment, but the store boasts its largest growth in the trade area, in plumbing and also garden supplies. “The department growth is due to the increased area and ranges that we now offer in the store along with the service element that we offer,” Mr Henderson explained.

“The store has a total area of 4000 square metres, which has all the timber and building supplies under cover, with a 100 square metre undercover loading area. We are also in a shopping centre and we are the largest tenant, which makes the store a local destination.”

“The store has easy access in all areas and a carpark in front of the store with 110 carparks and a trade area with drive-through convenience. We off er a complete range of products from basically the ground level to finishing off building projects including plumbing and landscaping requirements. We off er exceptional customer service including delivery in full and on time, plus our comprehensive ranges and competitive pricing and a significant mighty rewards program,” he said.

Store history
Mr Henderson explained that the original Balhannah store was opened over 70 years ago by the local apple growing community. They formed a co-operative in order to store its produce, and later added the hardware side of the business to benefit both the members and the community.

Serving the community is a tradition the Hendersons are proud to continue.

“We purchased the business from the co-op in 2013 as they had planned a significant expansion of the store, which we were very excited to be a part of. We have both been in the hardware and building supply business for the past 35 years and are passionate about customer service and supplying our customers’ requirements whether it be retail or trade supplies,” Mr Henderson said.

“I have been in the role of managing multiple hardware stores while Jodie has also been on the supplier side of the hardware business in her previous role. We are also involved with the local volunteer fire service,” he explained.

The Henderson’s extensive experience in the hardware industry has undoubtedly played a part in their success, along with the support offered by Mitre 10.

“We have been in the Mitre 10 group for the last 16 years and I have always been involved with Mitre 10 during my previous roles, whether it be in the retail or trade business,” Mr Henderson said.

Mitre 10 provided a lot of help with the redevelopment, taking care of things like product range and selection, as well as physically setting up the store. When asked “why Mitre 10?”, Mr Henderson responded “we looked at others, but Mitre 10 was just the way to go.”

Demographics
The Henderson’s success may also be attributed to how well they know their customers and how they continue to cater to their needs. The area around the Adelaide Hills is predominantly residential property with large blocks, above average size housing, and many hobby farms.
“We still have a significant number of farmers in the area plus apple, pear and cherry growers, along with boutique wineries with very good reputations,” Mr Henderson said.

The Henderson’s commitment to top quality customer service is evident due to its dedicated staff who strive to deliver exceptional service.

To achieve this, the staff use Mitre 10’s ‘Learning Centre,’ an online system that delivers training modules that can be undertaken either at work or at home. Some modules are mandatory, others voluntary, and subjects range from merchandising and product knowledge through to safety and security. It not only ensures that the store is well run, but that staff are equipped to handle customer queries.

Also ensuring exceptional customer service is a recruitment process, developed by management, that sees only quality candidates who meet high standards filter through.

Future planning
Despite the significant growth the store has already undergone in the three years since its redevelopment, the Henderson’s are still looking towards the future and planning for growth.

“We are currently reviewing our range offer, consulting with our customers on their requirements and all staff are participating in the Mitre 10 Learning Centre, which has a lot of new modules for staff training,” Mr Henderson said.

“We also have a very large mighty rewards membership which is continually growing, plus a growing Facebook following, and also a large group of account customers that we continually offer in store specials to. We are hoping that we can grow 10 per cent plus per year from word of mouth, which will include our range off er and customer service, which we always strive for the highest levels,” Mr Henderson said.

With the extensive experience Simon and Jodie bring to the team and staff who are dedicated to high customer service standards, it is little wonder Balhannah Mitre 10 has achieved National Store of the Year – Large Format. With the extensive plans they have for future growth, it seems 2017 is set to be yet another successful year.