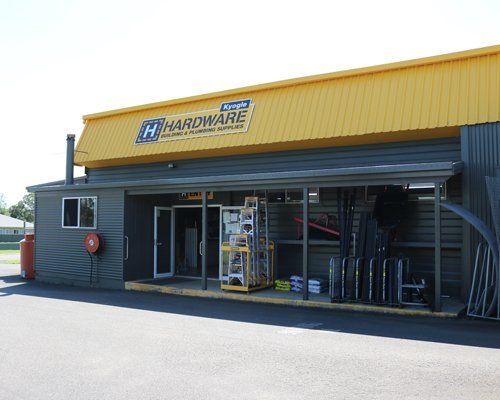 Since buying Kyogle H Hardware Building and Plumbing Supplies in 1994, Graeme and Wendy Johnston have continuously improved their store to dominate market share in the small town of Kyogle in New South Wales. The most recent improvement was rebranding to the new look H Hardware. Kiera Taylor reports.

Kyogle is a small village approximately an hour away from the northern New South Wales coast. On the outskirts of town, nestled between picturesque farm land and the surrounding green hills, sits Kyogle H Hardware – a 1300 square metre free-standing building, freshly painted with the bold grey and yellow branding that is the new look H Hardware.

With a population of just 3,500, it is difficult to imagine that Kyogle could support the three hardware stores that trade there; but after 23 years in operation, one of the store’s owners, Graeme Johnston, has learned that continuous improvement is the key to growing and dominating market share. He says that rebranding to H Hardware was the latest in a string of improvements the store has undertaken.

“We’ve been here 23 years and during that period I always find that you’ve got to keep improving your business,” he said.

“The time was right for the business to have a facelift and a paint job. I had looked at the H Hardware branding prior, but we just weren’t ready; whereas now, the time frame was right. And the colours are just a brilliant strong colour scheme and it was a good fit for us.”

When Mr Johnston and his then business partner (who has since left the business) purchased the store in 1994, it was called ‘Alternative Building Market’ and they had a long-term plan to grow it into a one-stop trade shop. They changed the name to ‘Kyogle Building Supplies’ in 1999 then joined HBT in 2007. Following that, they purchased Kyogle Plumbing Supplies in 2011 and incorporated it into the existing store; and after rebranding to Kyogle H Hardware this year, it now officially trades as Kyogle H Hardware Building and Plumbing Supplies. 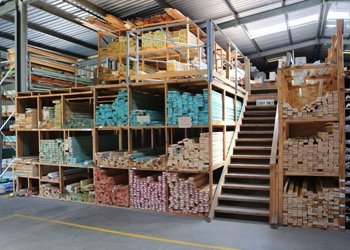 Unique offering
Mr Johnston differentiates himself in several different ways: one being in the diversity of stock he offers, and another being the volume of stock.

“I suppose in pure business terms people would say ‘no you shouldn’t carry that level of stock.’ But what I find is that it doesn’t give people a reason, or the excuse, to have to go and shop anywhere else. If they can come into our shop in this small community and they can get everything they want, they have no reason to then go into a larger centre,” he said.

This is primarily because the nearest large town centre is Lismore, over 50 kilometres away.

“If we don’t have it here it’s not convenient to have to travel half an hour plus to go to a bigger centre to get it, so we’ve always focused on having everything here. We have a plumbing department, a paint department and a general hardware area, a huge range of bolts and nails and door furniture as well as everything that goes with painting – all the accessories. We carry everything but frames and trusses,” Mr Johnston explained.

Despite not offering frames and trusses, Mr Johnston says that timber products command the largest section of the store.

“That includes timber mouldings, sheet products, plasterboard, FC sheet, we do a lot of reinforcing mesh, and we do a lot of roofing iron. The store is pretty strong right through. There aren’t too many holes,” he said.
“We are also very strong in the plumbing industry because we bought out Kyogle Plumbing Supplies.”

Mr Johnston has a background as a local government building inspector, and his son Martin, who also works in the business, has a background in building and carpentry. This allows them to give specialised service and product recommendations to customers.

“We are able to offer a unique amount of experience and advice to people. Builders come in when they want a design done on an LVL layout, and we’ve got that expertise to be able to give them that assistance and guide them through that process. So in those areas we are unique, given that we are a small community,” he said.

In addition to his son, Mr Johnston’s wife, Wendy, is now involved in the business following a career in hospitality.

Mr Johnston says that his previous career as a building inspector greatly influenced his decision to enter the hardware industry.

“I’ve always had a very strong interest in the building industry,” he explained.

“I’ve always been interested in hardware, building materials and construction, building houses and so forth. When I got out of local government I could see that Kyogle desperately had an opportunity and a need for a one-stop, fair dinkum building supply outlet, so that’s what we did.” 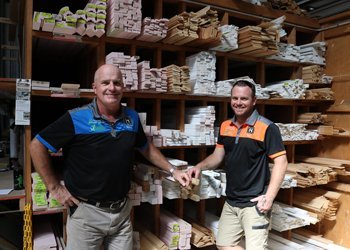 Rebranding refresh
Mr Johnston has been extremely pleased with the rebranding process, saying that it was a painless experience that took just a couple of months. He indicated that it gave him and Mrs Johnston a reason to review the entire store.

“It gives you the push to say ‘ok we’re going to do the rebranding – let’s have a look at the inside of the building, let’s see where else we need to lift our game and make some improvements’,” he explained.

“People come down now and say ‘oh my goodness you really stand out now!’ And that’s just uniformly right through. The colours just make a big statement, and we are a big building so it is a very good statement and it looks so professional.”

“Then through the H-branded products now we’re finding that those products are being very well received, particularly the Duralex H-branded paint, which I’ll give a big wrap to because we’ve had great success with the sales of that and it’s going to grow enormously for us. We’ve had really good feedback on the product,” he said.

Community engagement
According to Mr Johnston, Kyogle is an older population, and given that it is a rural community, younger people tend to leave due to a lack of employment opportunities; but he reports that this is changing.

“It is becoming very popular in the last three or so years,” he said.

“We have a larger influx of people, particularly from the Brisbane and Gold Coast areas… so the demographics are changing. It is still an older population but with those extra people coming here there are more employment opportunities so the future is positive for this area.”

Despite the gradual population changes, Mr Johnston does not see a need to evolve the store any further, instead opting to continue making minor improvements to better serve existing clientele.

“We’ll continue doing what we’re doing, and what we do best is good service. And that’s it – make sure we’ve got the products here to sell, and provide the service to get them delivered to those people who want them,” he said. 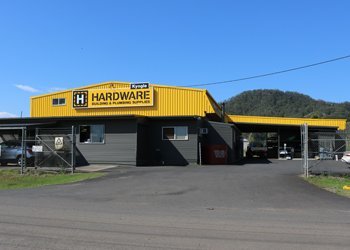 “We’ve just finished concreting driveways and creating an unloading bay with around 700 square metres of concrete. And we’ll continue building new racks – everything we do we try to make it as painless and easy as possible for tradies to get in here, get what they need and get out. So there are still areas we can make those improvements to.”

Mr Johnston reports having a dollar value of 30 per cent DIY customers and 70 per cent trades, but the focus on tradies extends beyond the physical store; like many hardware businesses, providing tradies with social outings proves to be a profitable, and fun, way to boost his brand.

“As far as the future and promoting ourselves, we’ll continue with our tradie social days which we’ve done for years and years. We have social golf days, bowls days, we take a bus to the local greyhound track in Casino some 30-odd kilometres away (we always have a Christmas outing to the greyhounds), which is a really good social day and they’re good PR days as well. And we’ll keep pushing more of the H-branded products as they become available. That’s what, in my opinion, is going to make the brand stronger,” he said.

Mr Johnston says the store has experienced higher than average turnover in recent times, which he attributes to being well established in the community.

“We’re in a small village, and we’ve been here for a lot of years,” he said.

“We’ve found very good returns from sponsoring lots of local sporting clubs and getting our presence out there. We’ve sponsored the local rugby union team for 23 years; we sponsor the league team, and soccer, junior league, touch football. We sponsor all the local sporting as well as social clubs, golf club, bowls days, anything like that where we can get our name out there.”

All of this, he reports, leads to a bright future for the store.

“The last two years we’ve had good growth. Last year our turnover grew by over 20 per cent and this year is on target to do the same. We have a very, very strong future,” he said.