After closing down for just over a year, Paint Place Gladstone has been re-built and re-opened bigger and better than ever. The store was offi cially opened to a very excited local community on November 28 and is such a success, it has already won the prestigious Paint Place Most Improved Store 2017 Award.

Just a few short years ago, in March 2015, Paint Place Gladstone was forced to close its doors aft er nearly 30 years of trade. The original store was run by the Earl family before it was taken over by members of the same family.
“There was a downturn in the local economy and the store ran into difficult times. It was then that the owners decided to close the store down. Competition is very tight in paint, especially in our local area, which is economically struggling at
the moment,” Paint Place CQ Director and General Manager, Brett Morrison said.
“This was when we (Paint Place CQ) decided to invest $2 million to re-build the store and open it back up again. But we had to move quickly because we were required to submit a building application within the year. We basically demolished it and left just a skeleton of the retail section, before rebuilding the entire store,” Mr Morrison said.
Paint Place Gladstone is part of the Paint Place CQ group, which is a third-generation family business. There are four stores within the group including: Paint Place Yeppoon, Paint Place Rockhampton, Paint Place Emerald and Paint Place Gladstone. Directors of the group include Les Earl; who is a founding member of the Paint Place Group and Paul Earl; who is his son, along with Les’ son-in-law Brett Morrison, who is a 30-year paint industry veteran and is now General Manager and Director in the group. 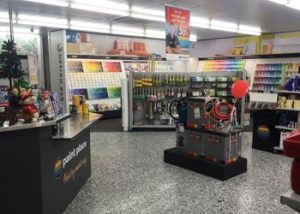 Point of difference
Mr Morrison said today the newly built store prides itself on being a true paint specialist, and offers many services to its customers and points of difference including an innovative new spray wall, designed specifically with a filtration system, so customers can try out spray guns inside.
“The spray wall was developed so our customers could come in and try out our variety of spray guns in-store. We have also developed a point of difference in the market by offering our customers plenty of services including ‘Find a Painter’, which assists customers in sourcing the right
painter for any type of paint job,” Mr Morrison said.
“We also now create customer profiles through our database in-store. This allows us to store all the details of projects our customers have completed and the colour of the different paints they have used on their house over the years. This also ensures our customers remain with us for
life, because we communicate with them on a regular basis and offer them services such as free workshops and free home maintenance inspections,” he said.

Catering to all customers
While Paint Place Gladstone has already managed to capture 85 per cent of trade painters in the region, Mr Morrison believes this is because the store caters to both trade and DIY customers, without making one feel inferior to another.
“In the new store, we have split our service areas to specifically cater to either trade customers on one side and retail customers on the other. This way when a painter comes in, he is served straight away and he is not waiting for a retail customer to be served also. We have found that this works really well. A lot of stores in the group would mostly have one counter and all the customers are served from that one spot,” Mr Morrison said.
The new store is substantial in size, at around 650 square metres and holds about 300 pallets in the main warehouse storage area plus about 200 square metres in retail-shelving. The stand-alone store is also situated on a corner block, for prime visibility.
“The size of the newly re-built store is decent and is now one of the biggest stores in the group. This probably helped us also win the Paint Place Most Improved Store Award for 2017. Criteria for this award included excellent interior and exterior presentation, as well as complying to the Paint Place merchandising plan and style guide,” Mr Morrison said.
“We were also judged on the functionality of the store, which includes what shelving we have, where the counter is and how we have set up our colour area. To be in the running to win the award we also had to ensure our stock was easily defined from house paint to timber, automotive etc. and the store also had to be laid out so customers could easily define where certain areas were as soon as they walked in the store,” he said. 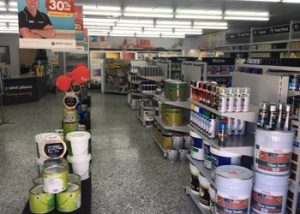 Future challenges
Competition in the area is stiff and includes several Bunnings, Inspirations Paint and Mitre 10 stores located throughout the local region.
“Currently our retail sales sit at around 22 per cent of the business, as the store is very strong in trade area which includes automotive and industrial products. We believe we should be sitting around 30 per cent for retail but this is something that we are working on our new strategies are backing this up,” Mr Morrison said.
“This is probably the slowest 12 months we have seen so far, as Gladstone is in a real turn over phase with its economy. Locals have been really happy with us re-building the store because it shows that we have a real commitment and faith in the town. We are thinking that we will run into a reasonable period of business in the next 12 months. When you hold on through the slow times it always thins out the competition, and the tough always survive.”
“Although the local market is poor currently, we know we can slowly build the business if we continue to focus on our colour service, as well as our ‘Design with Paint Place’ service, which incorporates an interior designer. We promote this service primarily in retail so customers know they can use this service to help them choose the right colours for the project they are conducting at home,” he said.

‘Painting made easy’
Mr Morrison said he has also found that the store’s traditional customer base is an older generation, which is why the store has introduced services that will help older customers source painters and look after their home maintenance so they don’t have to paint anymore.
“I want to know that if my customers are going to do some painting, they are doing it right. It is for this reason that we also offer a paint specification service. The specification service allows our customers to receive the right advice about how to go about a project they may be completing,” Mr Morrison said. 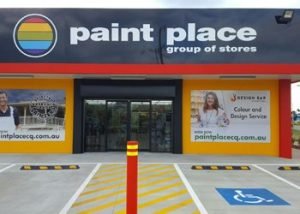 “This service was implemented because there are so many houses that we go to that have had a dodgy job completed on them, and it is so upsetting because it doesn’t need to be like that. A visit from us ensures the customer is taking the right steps to complete their project.”
“This is also another way that we can stand out from Bunnings and our competitors. We want to make sure our customers come to us for a reason, not just for the advice, but for our services as well.”
“We believe that specialists are making a comeback because we can give our customers more than what they get at Bunnings. We can’t open as many hours as Bunnings, so we are always going to be restricted in that sense, but we can off er something more to the retail customer and our trade customers,” he said.
Mr Morrison said he will continue to take the Paint Place motto of ‘Painting Made Easy’ seriously and said this is exactly what he intends to do for his customers in years to come; through the right advice, the right people and the right products.