As Mitre 10’s first Sapphire format store, G Gay & Co Mitre 10 Sebastopol not only has fourth generation family members managing the store, but has also become one of the most successful Mitre 10 stores in the group. 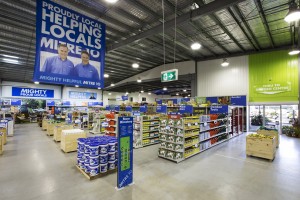 tre 10’s model Sapphire store
Mitre 10 developed the Sapphire format as the ideal store layout which would achieve ultimate competitiveness to big boxes and competing independents in the area, maximum sales and utmost customer satisfaction.
The well designed layout was specifically developed to suit customer needs, while the wide range of products provided within each department were chosen specifically to meet the needs of both trade and DIY customers.
Part-owner, David Gay, said the Sebastopol Sapphire store is not only designed with high racking and wide aisles, but with an appearance that ensures a clean, bright and inviting environment.
“Inside the store, Mitre 10 has designed displays specifically for plumbing, doors, paint, outdoor furniture and barbecues, while providing easy to read price tickets and POS material. Expert staff are located across all departments,” David said.
“Our customers also love the ‘easy to find’ layout, having the right selection of stock assembled and on display, as well as a ‘good, better, best approach to ranging’,” he said.

Development of the Sebastopol site
The Sebastopol site was developed after G. Gay & Co bought Ballarat Building Suppliers in Main Road Ballarat in 2002. This was the third store the company established in the Ballarat area.
“After about 12 years the third, Main Road store, had outgrown its site. We were just reshuffling things around but there was no spare land for the store to expand. This is when we moved the Main Road store to Sebastopol in 2014, which was formerly a Dahlsen’s and then a Mitre 10 store,” David said.
“When we bought the Sebastopol site, it was just running as a timber yard with a small range of builder’s hardware. It was just a big empty shed, which meant we had a blank canvas from the start. It was also around this time that we moved to Mitre 10 and rebadged our two other stores under the same banner,” he said.
The site has now become a signature store of the Mitre 10 group, boasting an open, bright environment, which not only provides locals with all the departments expected within a hardware store, but also an expansive bathroom, outdoor living, paint, building supplies and garden departments.

Store history
G Gay & Co was established in 1918 by Godfrey Gay, who initially sold new and second hand building materials, timber and mining supplies.
Godfrey was formally a mining engineer, until he established a timber yard in Armstrong Street, Ballarat.
The timber yard began with Godfrey purchasing and demolishing old houses to sell the materials as second hand building materials. After some time, the company incorporated new materials and phased out the second hand products. The business continued to trade and expand at the Armstrong Street site under the management of Godfrey’s son, Edwin Gay.
The business grew steadily during the 1920’s and in about 1930 new building materials were introduced. All deliveries were made by horse and dray, while all goods were handled manually. Supply of materials during and after the war years was difficult, with some customers having to wait up to two years to obtain all products needed to build a new home.
In 1956, Edwin’s son, Jim, joined the Armstrong Street business; however, by this time only new building materials were being sold. All supplies came to Ballarat by rail as road transport was not allowed and it was not until the late 1960’s that road transport was used. Edwin retired in 1963 due to ill health and Jim took over as the store’s manager.
In 1977 the business was relocated to Howitt Street, Wendouree, as it was a much larger premises and enabled the extension of the hardware part of the business, while providing an undercover service in the timber yard.
Within five years, a large extension was added to the hardware department and in 1978 the company joined a franchise group named ‘Homesaver Hardware’ which in 1993 joined with another group to then trade under ‘Home Timber & Hardware’. In 2014 the Main Road store re-located and bannered to the Mitre 10 group and is incredibly a fourth generation family business with two of Jim’s sons, David and Ross, now managing the stores.

Outstanding features
With the store’s sales split overall being 75 per cent trade and 25 per cent retail, currently some of the store’s biggest selling departments include: timber and builder’s hardware, paint, power tools, hand tools, plumbing and outdoor furniture.
David said the store has experienced steady growth over the last few years, despite increased competition.
“We do focus on our trade business and building relationships with our trade customers. We also like to run several trade nights and tradies breakfasts throughout the year as well, to maintain customer relationships and ensure there is loyalty from our trade customers as well.”
“Our expansive nursery is also very popular with our customers as it is managed by a local garden expert who not only understands local conditions, but also ensures the nursery carries a wide variety of suitable plants. We also run many special garden weekends within the nursery,” he said.

Local competition
There is plenty of competition in the local area with Bunnings, Dahlsen’s, Masters, Reece, Total Tools as well as several local independents all located in Ballarat, according to David.
“Ballarat is a very competitive market town, being only an hour’s drive from Melbourne and Geelong. As well as the Mitre 10 advertising and catalogues, we market heavily in our local area, including sponsorships of sporting clubs, charity fundraisers, schools and kindergartens, and community groups,” he said.

In conclusion…
G.Gay & Co takes pride in being a local family business and aims to provide friendly, prompt and expert advice to its customers, according to David.
“While a large part of the business is trade oriented, as well as supplying to domestic and commercial builders, G.Gay & Co also offers specialist advice to meet the demands from the DIY and owner-builder markets,” he said.
Over the three sites, G Gay & Co now employs in excess of 100 staff, some of whom have been with the company for over 30 years, with many customers purchasing from the family business over several generations. David said his hope for the future is that the company will continue to serve Ballarat and district clients for many years to come.