Another year and another Mitre 10 conference is complete. This conference was even more successful than last year in terms of registrations and the continued roll out and refinement of various programs to support members from the Mitre 10 executive team. 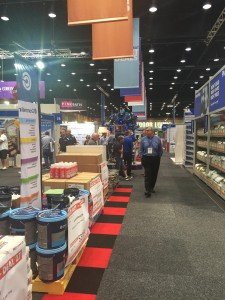 Now, with nine stores meeting the Sapphire standard of excellence, the conference theme for 2016, ‘Sapphire Builds Success’ was mighty appropriate for Mitre 10 members.

Other initiatives included the introduction of tendered

prices, with members committing to purchase from preferred suppliers resulting in an improved cost structure, cost savings for catalogue programs and new benchmark reporting. Members were also updated on progress in all these areas.

Over three days, the event included something for everyone to think about. Be it the wealth of knowledge imparted by John Venhuizen, ACE Hardware’s Chief Executive Officer and keynote speaker on day one; or individual briefings from each of the Mitre 10 head office business units, there was plenty for delegates to absorb.

Ace Hardware is both a retailer and a wholesaler, focusing on the convenience hardware market. With the exception of 92 stores, it services close to 4900 independently owned and operated family businesses around the world. Mr Venhuizen said “if you want to grow big, think small,” as people trust small business.

He said that in the US, Ace Hardware takes on the “big gorillas” of Home Depot and Lowes and in terms of percentage revenue growth, outstrips both of them. The same applies for net income growth percentages. 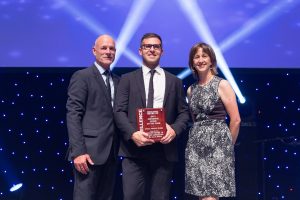 As the audience settled down for a morning session of information on Mitre 10 initiatives, CEO Mark Laidlaw welcomed delegates to the Mitre 10 Expo for 2016. With 1428 registrations, this was another record attendance for the conference and expo.

Mr Laidlaw sees a positive future for Mitre 10 retailers but one that will need continued effort to maintain through stores standards, the right range and impeccable customer service. The Mitre 10 head office team followed his speech to advise how each of their units is helping retailers succeed. 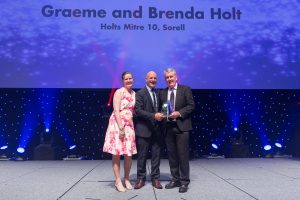 He recapped the most recent performance of Metcash reporting that it is a $14 billion business, with three main divisions: grocery division with $9 billion turnover, liquor division with the brands of Cellarbrations and BottleO at about $3 billion, and hardware as the third division which recently exceeded $1 billion in annual sales.

nouncement by Woolworths to exit the segment, proceeded the conference by just a few weeks, and Mr Laidlaw did say he wanted to influence the future hardware landscape for independents.

“We have to give Australians choice. With the recent announcement that Woolworths is leaving hardware, it’s going to be a pretty boring world if Bunnings pick up the entire hardware sector.”

Mr Laidlaw said that the Masters entry had made Bunnings sharpen its efforts, improve its customer service and move into regional Australia. Bunnings was also a powerhouse.

“In terms of Bunnings, we have to learn to coexist. And we can, because Australians need choice,” he said.

Mr Laidlaw said that the trade market is very interesting.

“Even over the last five years, there is still no major player in trade. There’s some good players in trade – big players such as Dahlsens, Bowens and ourselves – but there’s no-one actually dominating the market place, and there’s a great opportunity for us in that.”

He said the Sapphire store transformation program is the culmination of all those consumer-driven strategies that have been launched over the past 24 months.

Mitre 10 had grown wholesale sales each year over the last five years, averaging seven per cent.

“We had an absolutely outstanding year last year where we grew at 11 per cent wholesale, and we hit the $1 billion wholesale sales mark,” Mr Laidlaw said.

“What we are buoyed by today is this data, this information that we’re now getting; we now receive scan data from our network, and therefore we can understand what the sales are at the retail end.” 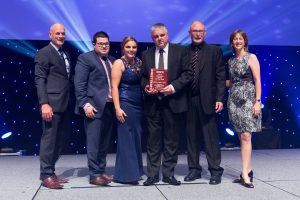 “So for the first nine months of this year – in those scan data stores – our sales are growing at 9.5 per cent. Same store sales growth is over five per cent, and the Sapphire stores of which we now have nine, are growing at 16 per cent growth on last year,” he said.

Annette Welsh, Mitre 10’s General Manager Operations and Trade, also introduced case studies of three successful retailers and this proved to be one of the highlights of the business session.

Fred Bordignon and his team from McLaren Vale South Australia spoke about the strategies and plans he put in place to combat a Bunnings store opening nearby. His message to other store owners was they should be prepared to fight to retain customers, and with the right approach and planning they can be successful.

Steven Czeiger, from Sunlite Mitre 10 in Sydney, also spoke about the success he has had by focussing on customer service and people. Steven took over an existing store in Paddington, completely refurbished the store, and added excellent customer service; a winning formula.

Michael Brennan and the team in Dubbo followed the Sapphire transformation program. They reviewed store layout, range, pricing, customer service and marketing. The results have been pleasing and have transformed the store for the future. 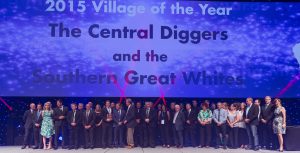 With over 1000 retailers, suppliers and Mitre 10 executives in attendance, the evening was a great opportunity for Mitre 10 ambassador Scott Cam, and General Manager Merchandise, Carl Salem, to provide wisdom and wit when announcing the winners in the respective categories.

The chosen ones were uniformly gracious in accepting their awards, recognising the importance of their win. Winning suppliers were thankful of the opportunity to work with Mitre 10 and retailers acknowledged head office support.

Retailer award winners by category were:

Overall Supplier of the year:
Dulux

Jevan Dickinson, Dulux Retail General Manager said, “it is a great testament to the work that our sales and marketing teams put in, they work closely with the Mitre 10 teams to deliver a great result. Obviously when they’re successful, we’ll be successful. We really like to think about our relationship with our partners as great business partnerships, when we work together we get a fantastic business result.”

Trade Supplier of the Year was awarded to ITI Australia.  National Accounts Manager, Germano Tomasetti told AHJ he was delighted with the award and believed “it is recognition of the effort and hard work that the company puts in to the relationship with Mitre 10. It is also recognition of the partnership that we have with members of Mitre 10.”
Retailer’s viewpoint

Sunlite Mitre 10 Managing Director, Steven Czeiger, said that in winning Small Format Store of the Year, “it was recognition for a lot of the hard work and dedication that has gone into building up the Bondi business.”

“The staff are ecstatic. Everyone came into work the day after the expo and were over the moon and excited. They are all very proud to be part of the Sunlite Mitre 10 group and this award makes them feel like they are working at a place that is an employer of choice,” Mr Czeiger said.

The Large Format Store Award went to G Gay & Co Mitre 10 Sebastopol, owned by Ross and David Gay. David Gay said, “we have put a lot of effort into the design and the set-up, as well as keeping the store in a very clean and well-presented condition since its opening. So I guess it is recognition that we are doing it well and that it has all been worthwhile, all the hard work, because it took a lot of time and a lot of expense to get it all set up.”

“The trade side of it has continued to grow. We have far exceeded our budget in the first year,” Mr Gay said.

The winner in Trade this year is Flinders Mitre 10 which runs two trade centres south of Adelaide at Aldinga and Reynella. Flinders Mitre 10 is owned by Brook, Jacqui and Flin Chambers. Brook Chambers said he thinks their move to Mitre 10 in 2013 has been a huge positive for their business.

“If you could see our business about three or four years ago, to where it is now, it has been a massive transformation, which has been very positive. So our sales have been increasing.”

“The feedback about our stores has also improved and it is better for our retail customers as well. Our success is due to our staff, and the relationships we have built with our trade customers, and that’s what we value the most,” Mr Chambers said.

The True Value store winner came from Western Australia this year, owned by Bernie and Liam Finestone, York Building Supplies. Mr Finestone believes the reason for the win was his store’s high standards.

The Ian Nisbet Hall of Fame for 2015 was awarded to Fred Womersley who also told AHJ, “I am just so thrilled that it’s a recognition of I guess not just what I’ve done for Mitre 10, but what my father did for Mitre 10, and what my sons and my nephew are now doing for Mitre 10. It is recognition from your peers that the Womersley family have made a fabulous contribution to Mitre 10 over 56 years,” Mr Womersley said.

“We are probably now 25 per cent retail, 75 per cent trade, and we all know why that has happened. But it’s worked out, we’re doing it well.  As John from Ace said you had to move with the market. We have certainly moved with the market, and it is working out really well for us; we are doing really well.”

“The other thing is that the change of Mitre 10 from 50 years of being a co-operative to the disciplines and the retail expertise of Metcash is just so different. And it has been so good for us, and it is terribly good for anyone who supports the group properly,” he said. 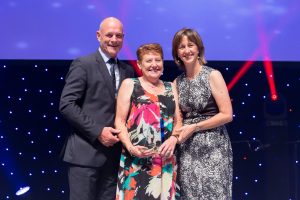 The CEO Recognition Award went to Graeme and Brenda Holt of Holt’s Mitre 10 Sorell, Tasmania. In an interview with AHJ, they said their store extension could not have been achieved if they had not had the support of Mitre 10.

There were two blocks of land they needed to purchase to complete their dream expansion of the store, saying, “Mitre 10 have been fantastic with it. They have helped us with store development, obviously with layout and design and then of course all the livery design and support. And it is not just necessarily financial; it is actually people resources that they sent down as well. You just could not do it without them,” Mr Holt said.

For the rest of the awards, the 2015 Blue Blood winner was Julie Maxwell, Store Support Marketing Officer Queensland, while the Village Award was shared by the Central Diggers and the Southern Great Whites from South Australia.

The Paul Murphy Mighty Helpful Customer Service Award was given to Carol Vanderkraan from Johnson Bros Mitre 10 Avalon. Ms Vanderkraan has gained a reputation for home decorating advice and is sought out by customers looking for advice on colours and type of paint finish.

In a gracious acceptance she said she is really only doing what she loves, which is helping people.

As another successful Mitre 10 conference and expo has concluded, it is worth noting that next year the competitive landscape will be mighty different depending on how the Woolworths hardware business is sold off.

One thing for sure is Mitre 10 and True Value stores will stand ready to take on the fight for an even bigger share of the hardware pie.