The Independent Hardware Group emerges as the new force in hardware

The Independent Hardware Group emerges as the new force in hardware

The merging of two strong independent hardware brands can only benefit the segment.

Mitre 10 CEO Mark Laidlaw has spent the past six years running the business since it was purchased by Metcash. Formerly General Manager Victoria for Metcash’s IGA Distribution operation, Mr Laidlaw intricately understands the supply chain model that works best for independents; no matter the channel they operate in.

During his six years running Mitre 10 it grew, through many initiatives aimed at making its independents stronger and more successful, into a $1 billion business.

Now with the Masters brand about to disappear, and some collateral damage inflicted on the poor independent hardware operators at Home, it is a judicious irony that Mr Laidlaw finds himself at the head of a combined group of independents with a turnover a shade in excess of $2 billion annually.

The Australian Hardware Journal caught up with Mark Laidlaw in November at the Home support office in Heatherton. This is one of two support offices for the former separate entities, and will eventually emerge as the new head office for the group which also has a new name; Independent Hardware Group. The new name reflects exactly what its charter is, to support all the current banners within the merged entity. 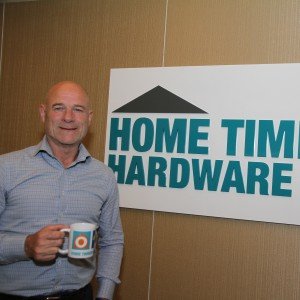 Mr Laidlaw told AHJ that Metcash officially took over the HTH Group business on October 2, 2016, and a new executive team has been appointed to run the Metcash hardware pillar

“In the first six weeks there have been two pressing needs.  Firstly I have had to appoint a new executive team, and then we have had to get out, travel the country, visit both Mitre 10 and Home, Thrifty-Link and True Value members,” Mr Laidlaw said.

He said that the newly appointed integration team has completed face-to-face regional meetings in all states resulting in a strong turnout of over 900 independent store owners and staff.

Mr Laidlaw pointed to the fact that the regional meetings provided a valuable forum for himself and the support team to listen to the concerns of store owners. More importantly, it allowed them to come together and show the strength of the independent sector.

He commented on the fact that the members had previously, up until October 2, been fierce competitors in their local markets in some cases.

The format of the meetings was simple. Everyone introduced themselves and told their story. Proud family businesses, in some cases going back three generations, have a lot of similarities.

Mr Laidlaw said that once the initial caution was overcome, members from each banner found that most had similar stories with regard to keeping their own independent stores ticking over.

He said that at a combined meeting of representative members, there was genuine excitement for the new era and a commitment to come together as one Advisory body in the near future.

Follow up calls to key independent retailers of both banners revealed that there was excitement, and growing realisation that a stronger, combined business far outweighed any concerns.

In relation to the new name for the Metcash hardware pillar, Mr Laidlaw believes that Independent Hardware Group fits well with the strategic vision of the Metcash group, which is to ‘Build Successful Independents’ and grow a vibrant and long-term independent hardware sector.

“We have now got Independent Hardware Group as our logo. Interestingly, the colour scheme determined for the new logo is an exact combination of the HTH ‘turquoise’ and Mitre 10 ‘blue’. The building blocks reference our trade heritage and the journey from separate, single businesses (one block), to a combined business (two blocks) and the exciting growth we have ahead of us (three blocks),” he said.

According to Mr Laidlaw, one key to a smooth transformation of the business is the new integration team.

“The team members are Laurette Chang-Leng, Andrew Toomey and Greg McKean. Its purpose is to assist the new executive team in completing the key work streams which fall under five key pillars – People, Customer Terms, Brand, Systems and Supply Chain,” he said.

“It is an exciting time as we bring together two strong businesses. We believe that if we execute our plans effectively and our 780 branded stores stay united as a group then not only will Independents survive, they will thrive in this new environment,” he added. 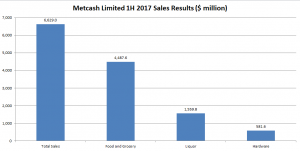 Home members are on board

While it is early days, there is feeling of excitement with the new opportunity for a much stronger combined presence in the hardware market place according to independents contacted by AHJ.

Nick Clark owns Home at MacLean and is Chairman of Home’s Trade Retail Advisory Council (TRAC). He told AHJ that he has been fielding member questions before, during and since the takeover.

Mr Clark pointed out that from his observation the Mitre 10 model is very friendly towards independents.

“Their whole life revolves around the success of an independent.  Their key focus is on building successful independents. In saying that, we do have different models; the businesses are different, the product, the ranging, the customer experience in the two stores at the moment through the Mitre 10 and the Home Timber & Hardware stores are different, and I don’t see that as an issue with the two currently surviving in the industry,” Mr Laidlaw said.

“I see it as a positive for both ways because we’ll be able to get the better of both worlds and follow the best practices for both businesses and both enhance our own,” he said.

Steven Iser runs Hume and Iser at Bendigo a 136 year old family business. He attended all the meetings, and said there are still a lot of unanswered questions “because, with all due respect, they just don’t know how it’s all going to come together.”

“One of the biggest issues discussed was what brand are we going to be, and how many brands will there be in the future. Whether that’s going to be a Mitre 10 brand or a Home brand we don’t know, and I suppose that’s one thing that we’re concerned about – are we going to change colours – and my personal opinion is that we probably maybe should have a new brand moving forward, and launch something that’s exciting and that is completely new and independent,” Mr Iser said.

Jeff Hitchen owns the Home store at Moe and told AHJ, “What we are seeing is it is great to have a strong independent group, and the benefits of their buying and promotional activities should be an advantage to all independents.

“Whilst it is new to us – the unknown is still out there, talking to the integration team – it appears that they’re all making the right sort of noise, that they could do best of both groups instead of just one.  We don’t want the best of just Mitre 10; the best of Home and Mitre 10 should end up with something really good,” Mr Hitchen said.

On the Mitre 10 side, Steven Czeiger who runs a group of five Sunlite Mitre 10 stores in Sydney’s CBD and Eastern Suburbs sees strength in the combined businesses.

He told AHJ, “I am personally excited by the Mitre 10 acquisition of HTH as I believe this is an excellent move for independent hardware retailers and our customers.”

“The combined increased scale and efficiencies will now enable Mitre 10 to be more competitive and be a serious number two in the Australian hardware industry,” Mr Czeiger said.

Mark Laidlaw has a lot on his plate with a new executive, along with review groups, finalising trading terms, advertising, the banners and supply chain. But, it is a challenge he is relishing and is just the man to lead Independent Hardware Group forward.

By the time newly named Independent Hardware Group holds it conference and expo in February 2017, many of the members’ questions will have already been answered.

Metcash released its first half sales result on Monday November 28 with the period including three weeks sales from the HTH Group stores; officially acquired from Woolworths on October 2.

The company posted sales revenue of $6,629 billion with a profit of $74.9 million and shares rose eight per cent on the announcement.

Metcash CEO Ian Morrice said he expects HTH to contribute at least $10 million in earnings in the April-half. Synergies from the merged Independent Hardware Group operation are expected to reach $15 million to $20 million by the end of 2018. This is after sharing the benefits with HTH and Mitre 10 retailers.

As a total business, Metcash is performing strongly in its liquor and hardware divisions. The supermarket and convenience division is under extreme pressure from a renewed Woolworth’s supermarkets unit as well as Aldi expansion.

In spite of this pressure, the division managed to show modest like for like store sales growth of 0.3 per cent.

Full year performance across all the Metcash divisions will be boosted by the fact that this financial year for the company is 53 weeks with four additional trading days. Metcash’s financial year ends in April.