Tool innovator, Wera Tools, launched into Bunnings in February, after 12 months of
planning and selecting products that cater specifically to Australian needs.

Well known as the ‘tool rebels’ and market leaders throughout Europe, Wera Tools design original tools never seen on the market before. 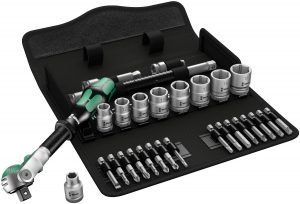 ropean made tools, are already well respected in the market, after devoting 80 years engineering quality tools and has now launched 27 SKU’s throughout 200 Bunnings stores around Australia.

Popular throughout Europe, the UK and Japan, and as the market leader in Scandinavia, Wera believed it was time to introduce products designed by some of the best German designers and engineers in the world.

“We develop ground breaking tools that push boundaries. Our drive to transform the mundane into the extraordinary is limitless. If all you want is a screwdriver, we can do that. But if you demand more, then you’ve come to the right place. We challenge the standard by making the experience of our users easier, safer and faster … full of joy,” Wera recently reported.

“It is not only the innovation we implement but the materials we use, which are very strong and undergo more stress on the steel than a usual screwdriver. Each tool grip also has a patented handle designed specifically to fit into the palm of the hand,” Mr Josch said.

“We also designed a half inch ratchet, which is not only virtually indestructible, but also has two hammer faces, so you can also use it as a hammer to wack a stubborn bolt or nut. This tool was developed after we discovered many ratchets being used as a hammer, which is why we implemented a ratchet and hammer into the one tool. This is perfect for farmers, miners, riggers, while also preventing the misuse of tools,” he said.

Wera’s ground-breaking designs are developed from a young team of sophisticated inventors who implement the innovation and engineering to develop the unique tools. With a factory boasting 17,000 square metres, the manufacturing facility is both expansive and impressive.

“Wera specifically targets tradies who want to invest in their tools and know they have bought quality, which makes it more economical at the end of the day for them and for the employer. The job is also safer because of the unique angles that the tool provides, preventing the user from injuring their knuckles,” he said.

Wera offers a lifetime warranty with all of its 3000 products, because globally there are very few complaints on any of the products. Wera also recently boasted that it had doubled its turn over globally in the last ten years, attributing this success to the innovation it has implemented into its products, by turning the ordinary into extraordinary.