Total Tools Wingfield wins back to back awards 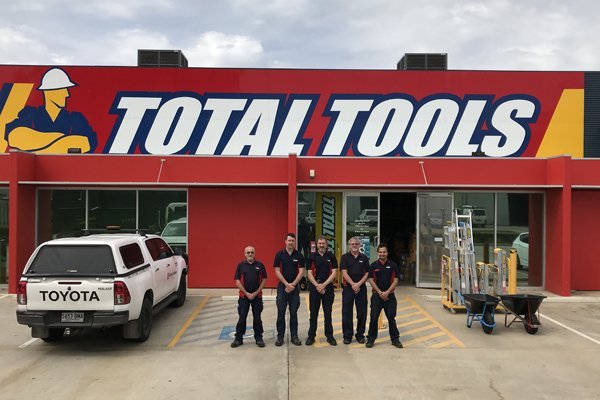 Total Tools Wingfield wins back to back awards

Total Tools Wingfield was a shining example of a well-run business, at the 2017 Total Tools Supplier Conference held on the Gold Coast in September, after winning a store award for the second year in a row, during the Gala Dinner and Awards Night.

During the award presentation, Total Tools Chief Executive Officer, Tim Cockayne said that when it comes to eliminating out of stocks with core brands, no one is near Mr Rousseau’s level.

“He has the right people around him to help him with the business. Looking at the level, you (Mr Rousseau) have got the business to is an inspiration because then we say to other franchisees, ‘this is what can be achieved’,” Mr Cockayne said.

Mr Rousseau agreed that a stand out quality of his store was ensuring his store was in-stock all the time, which in-turn reassures customers that when they visit the store, the product they require will be there without question.

“We have a very low stock out, so we try to run a tight ship in terms of our whole inventory management. I think it is really important that you are in stock as much as you possibly can be,” Mr Rousseau said. 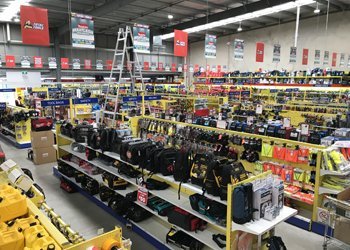 “It is also essential that you have products available at all times because when a customer comes in looking for a product, they don’t necessarily want it in two-week’s time. They might be looking for a certain product for a job that they want to do, particularly over the weekend. We also get some customers coming in looking for a certain sized socket that they need to have for the job they are completing that day and it’s important that we have got the stock,” he said.

It is also about getting the right staff into the business and making sure management equip staff members with the correct skills to do their job properly, Mr Rousseau said.

“It is absolutely about having the right staff and we have a good team, combined with a great team spirit within the business. We also pride ourselves on customer service, which is through staff training and hiring the right staff for the job,” he said.

Mr Rousseau’s Store Manager and staff all have extensive experience in the professional tool industry as well as retailing, which again lifts the level of professionalism in-store.

Store history
It was just over three years ago that Total Tools Wingfield opened in June 2014, but before opening his business, Mr Rousseau had a background in the pharmaceutical industry, as well as former experience in the health care industry. Total Tools Wingfield is now a family run business, with Mr Rousseau’s wife, Verena, also assisting the running of the business. Their son also assisted with the business in its early stages, but has since joined the police force.

“I wanted to do something for myself and run my own business, so I did a bit of research into franchises to basically see which ones I thought would fit best for me. I found that the Total Tools group came up pretty strongly. I was looking at the professional tools industry because I have also got a bit of mechanical back ground and I believed that going into the professional tools space would be something that I would enjoy doing,” Mr Rousseau said.

When talking on how the Total Tools group stands out from other independents, Mr Rousseau said there were several aspects to the independent group’s point of difference.

“Th ere are a couple of aspects in regards to how the group stands out from others, with the Total Tools range being one of the major strong points. We are also very competitively priced, so when people come into the store they know our pricing will always be very reasonable. Th irdly, customer service is another stand out aspect for the group. I think across the group, customer service is something that all stores strive to do well in and they go that extra step to off er professional advice to their customers,” he said. 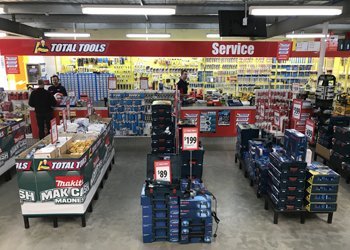 Store dynamics
At 1350 square metres, and with about 1100 square metres being retail space, Total Tools Wingfield is a store that remains well placed in a very competitive market. “Our competitors include Bunnings, Blackwoods, Bianco Construction and Industrial Supplies, as well as Adelaide Tools, with all of these businesses very active in this space, so it is quite a competitive local market. But I think provided you have got good customer service and you are competitively priced, there is no reason why you should not be able to compete well,” Mr Rousseau said.

Total Tools Wingfield’s customer dynamics include five per cent DIY customers, 70 per cent tradies and the remaining customer support coming from local businesses in the immediate area. “Wingfield is a rather large industrial area, so a lot of our customers come from local businesses in the area. In saying this, it is difficult to determine which departments are particularly popular in-store because we sell well across the whole range and I wouldn’t say there is any one area that stands out. If anything, the automotive department is quite popular due to motor mechanic products doing quite well in-store,” he said.

Marketing
Over the next 12 months Total Tools Wingfi eld will continue to run with the national campaign run by the support offi ce while also conducting its own campaigns, including special insider events, such as tradie nights, for loyal customers that support the store on a regular basis.

Looking forward, the store will continue to focus on its immaculate reputation for limited out of stocks and professional customer service, while also remaining competitively priced in the local market.