Park Road Home Timber & Hardware has just celebrated its 60th birthday after starting off as a building depot in the 1950’s when it was established by former builder, Fred Waller and his two brothers. 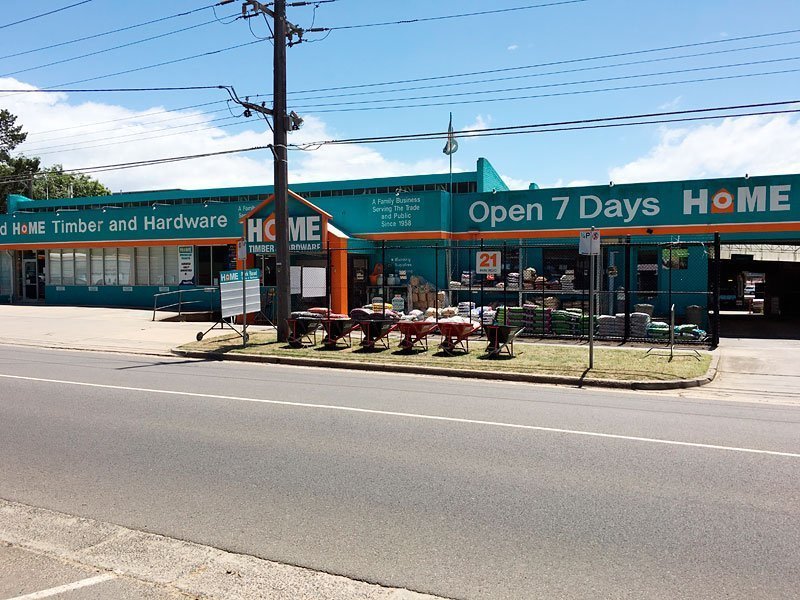 As a third generation director of the business, Ashley Waller, said the store has grown significantly over the last 10 years, primarily on the back of the store’s trade division.

“In the 1950s my grandfather, Fred Waller, and his two brothers were builders. Initially they had government contracts to build schools in this area, but the government money eventually dried up and they closed the building company. It was after this they decided to use the current site to sell off their materials to builders in the area,” Ashley said.

“Then the store just grew from there. They originally expanded the business by building the timber yard down the back and from there the business grew and grew and 60 years later we are still here. I am third generation, my father, Tony Waller is still involved with the business as a director and he and his brother David (dec.) followed their father Fred into the business. Fred passed away about 13 years ago and he was still working well into his 80’s,” he said.

Park Road Home Timber & Hardware currently has a medium sized hardware offer with the selling area of the store totalling around 4000 square metres and the percentage of tradies to DIY being about 80 percent trade to 20 per
cent retail.

Growing a retail offer in a trade environment

Today Ashley successfully runs the store alongside his brother Chris and his dad Tony Waller.

“Our growth over the last five to 10 years has been on the back of employing account managers who are now assisting in building the business. Park Road Home Timber & Hardware is primarily a trade store, however we have grown some of our retail offer by completing several store re-lays recently. The garden department has grown the most since the last re-vamp of our store last year.”

“I also believe sales have improved across the board because the building market is pretty buoyant at the moment. It definitely did flatten off after the GFC and this is when our turn-over was affected but it has come back again with the market. We have also probably grown our portfolio of clients with the extra sales staff that we have on board now,” Ashley said.

Not only did Park Road Home Timber & Hardware recently win Home Hardware Victorian Store of the Year, but Ashley said the store has been nominated for trade store of the year several times.

“We have been lucky enough to be nominated a few times for Home Timber & Hardware’s trade store of the year and we have also been nominated for the Hardware Association’s Victorian Trade Store of the Year. We also won the Home Hardware paint championship back in 2001.”

There is plenty of competition in the Cheltenham area, according to Ashley. Particularly from a trade perspective with Bowens being a direct competitor to the store because they are a similar make up of business and they have a definite trade focus.

“The customer base of Bowens and our store is very similar, because we are both trade focused stores. We also have a Mitre 10 store near-by which is another major competitor, and then we have Bunnings in Mentone which has also certainly affected the store’s retail capacity in recent years,” Ashley said.

“Our retail sales are still OK because we are in a good location, which is very convenient for our customers. Convenience and service is definitely our strength,” he said.

“We recently ran a family day in October and we have run this for the last two years. We like to kick this day off in early October as this is when DIY’s really start to look at what improvements need to be made around the house and we like to remind people in our area about our comprehensive retail offer. On the family day we run supplier demos and activities for the children including a jumping castle and barbecue etc.,” Ashley said.

“This family day has been particularly successful over the last two years. It seems that Bunnings does this every week but we just do it occasionally to try and entice local customers to re-visit the store and remind people that we are an alternative – particularly the mums and dads who are really seeking expertise and advice. This is definitely our strength,” he said.

Looking into the future Ashley said Park Road Home Timber & Hardware will continue to draw on the extensive experience of the staff, who have not only worked at the store for an extensive period of time, but also know what they are talking about when customers ask them for advice.

“We will continue to draw on the fact that a lot of our staff have worked at the store for many years and are very willing to help, while sharing a wealth of information with our customers,” Ashley said.