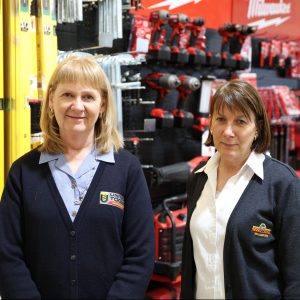 In 1964, a young mother of three, by the name of Clara Westhorpe, began what is now well-known as United Tools Williamstown.
Just over 52 years on, the business is now run by her daughter, Carrie Stone, along-side daughter-in-law Jan Westhorpe, after Clara started it from scratch.
Before starting the business, Clara was already one of the first women to complete an accredited welding course at Footscray Technical College.
“My mum had migrated from Europe with her parents when she was 18. My grand-father ran a foundry in Europe, so my mother was very used to this environment. When she came here and completed her course, it was not anything unusual to her because she grew up within the industry,” Carrie said.
“The business began after my mum worked as a sales rep for a company that sold transformers, which are transformers used in welding. When the company split in two, the owners wanted to get rid of the welding side of the business. When they offered it to Clara, she took it on,” Carrie said.
“Initially the business started from Clara’s home in Altona. I can remember one of the rooms in the house was where the business ran out of and my grandfather helped with the books and also helped look after the children, while Clara went out and made sales calls and deliveries. Many of the products Clara delivered included welding machines and consumables that were related to welding including electrode holders, electrodes, that type of thing. Clara was a working mum in the 1960s, bringing up three children on her own,” Carrie said.
After a few years Clara did re-marry and her husband became a part of her growing business.

Building a new store
After Clara met her second husband, who was a worker at the one of the companies she called upon, the couple purchased the current Williamstown property. This would have been over 40 years ago, according to Carrie.
“The store initially operated out of a tin shed, on the property, and over time the building expanded and grew from there. Customers then gave us feedback that they required more in-store than just welding products and began asking for power tools, abrasives etc. As the requests came in, the business continued to grow and expand,” Carrie said.
So the couple worked hard for many years and kept expanding and growing the business.
Carrie said she began working in the business when she was about 20 years old and spent a lot of time managing the store, while her mum worked on the road as a sales rep. Soon after, Carrie’s sister-in-law Jan came in to the business working in the accounts department. 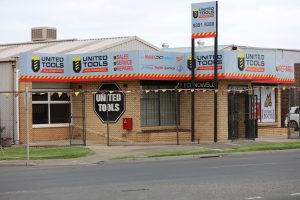 United Tools founding member
Clara not only established United Tools Williamstown, but is also one of the founding members of the United Tools Group.
“I think initially there were a group of six retailers who started the group, and Mum was one of them. The United Tools group gradually grew from this and was officially established in 1990. Today being a member of the United Tools Group allows us to purchase products at the right price, so we can then offer our customers decent products at a competitive price,” Carries said.
Although the store does compete with a Bunnings just one kilometre away, Carrie believes United Tools Williamstown’s point of difference, is that tradies can receive one on one service at the store.
“Tradies still find it extremely important to be able to come to a smaller store, receive personalised customer service, and have a one on one conversation with a staff member,” Carrie said.
“It is hard to compete sometimes but but we manage to do this through diversity and including popular products, such as safety gear, into the store,” she said.
Clara finally wrapped up her career at the age of 75 and she is now aged 83. In the later years, Clara was still on the road making calls to her customers, while Carrie and Jan ran the business full time. When Clara retired seven years ago, Carrie, Jan and their husbands took over the business completely.
“Our husbands are directors in the business with us and they do support us in the back ground, but Jan and I now primarily run the business on a day to day basis,” she said.
Women working in a male dominated industry
When asked what it was like to be a female running a business in a male dominated industry, Carrie said that although it can be hard at times, but she has a lot of really good customers who enjoy talking to women about the latest tool or welding product they may be sourcing for a job.
“I don’t think the industry is as stereotypical as you would think, with males not wanting to talk to females in fear that they will not get the advice that they need. However, our customers know us now and believe in our product knowledge, and they do often say it is nice to talk to us because we really listen to what they need and try to help them,” Carrie said.
Marketing through United Tools
Although there are no major changes planned for the business in the near future, the store continues to trade primarily as a trade store, even though DIY customers are always made to feel very welcome.
“Our marketing is through word of mouth but we also run a website, which United Tools head office run for us. We have a website that is fed through head office and is run under the United Tools’ banner. So when United Tools run a promotion, all of this promotion material is automatically run through our web-site as well,” she said.
Looking into the future, Carrie said she just hopes to continue to run the business well and make sure that the store survives another 52 years.